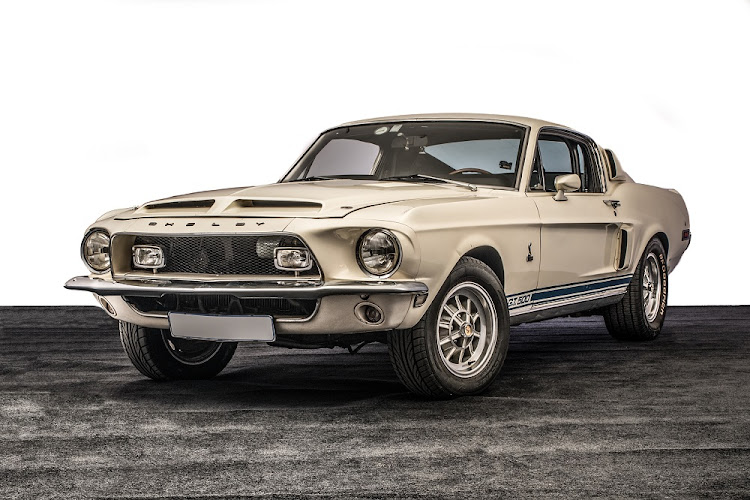 The original, unrestored Ford 1968 Shelby Mustang GT 500 is expected to draw global interest when it goes under the hammer this coming weekend at Steyn City Golf Course in Johannesburg as part of the auction hosted by international auction house Coys at Concours South Africa.
Image: SUPPLIED

Among the classic cars and motorcycles expected to get petrol-heads revved up as they go under the hammer at the weekend is an original and unrestored Ford 1968 Shelby Mustang GT 500 likely to draw global interest.

It will be auctioned in Johannesburg at an international auction hosted by Coys as part of Concours South Africa at Steyn City Golf Course on August 10 and 11.

The “achingly-original” Mustang is one of 1‚100 produced by Carrol Shelby‚ along with Ford‚ in 1968.

Concours South Africa organiser Greg Marucchi believes it could be the only original‚ unrestored one in existence.

“A car is only original once. As soon as it has been restored it loses that factory-built originality‚ which is irreplaceable. The wonderful thing about this Shelby is that it is still remarkably presentable in its original paint and trim‚” he said.

Coys has distributed their catalogue to 25‚000 clients and expect global to bidding to be “intense”.

Wayne Plit is the third owner of the Shelby‚ which was first bought by a South African travelling in the United States in 1968.

“The car was driven around the United States‚ including a trip to Disneyland in 1969‚ before being shipped out to South Africa in 1970‚” Concours said in a statement.

The second owner was Francois Lamprecht‚ who bought it soon after it arrived on local shores - and then sold it four decades later to Plit. To date it has covered 108‚308 km and still wears it original Wimbledon White paintwork with Guardsman Blue door sill striping.

Lifestyle becomes lucrative business for friends who live like brothers.
Lifestyle
3 years ago

“It still wears its original‚ unrestored 10-spoke alloy Shelby wheels and a T-bar Hurst shifter (also factory-original) for its four-speed gearbox. The engine has never been opened‚ and the original spare wheel still resides in the boot‚” Concours said.

Concours South Africa organiser Paul Kennard said there would be 100 people bidding along with those bidding via telephones and abroad.

Meanwhile‚ on foreign shores‚ a 1962 Ferrari 250 GTO is expected to be auctioned off for what could be a record-breaking $45-million later this month in California‚ United States.

Reuters reported this whopping price tag would make it the “most valuable car ever to be offered for public sale”. The current auction record was set in 2014 when another 1962 Ferrari 250 GTO sold for $38.1-million.

“This was the last car that you could park in your garage‚ drive to the track‚ win the race‚ and then drive home‚” RM Sotheby’s car specialist Shelby Myers said.