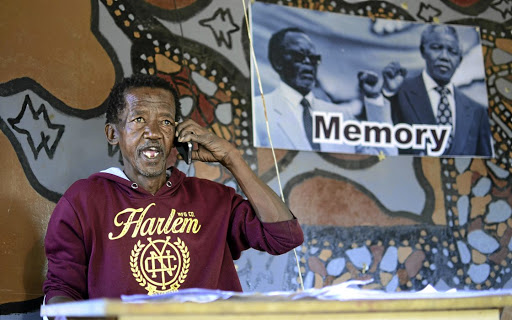 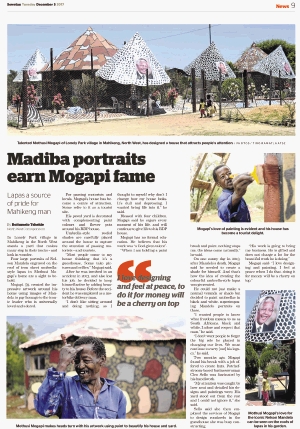 A North West man who created impressive pieces of artwork around his home using images of the late president Nelson Mandela has received a shot in the arm from the lottery.

Mothusi Mogapi, 59, of Lonely Park village in Mahikeng said he was excited that the National Lotteries Commission saw it fit that he must show his creativity for people to see.

This was after he received a letter saying he would be given funding to renovate parks and schools in Mahikeng.

The letter dated January 18 2018 from the National Lotteries Commission said his application for funding had been considered and a grant of R 116 000 had been allocated to him.

Lapas a source of pride for Mahikeng man.
News
4 years ago

He used four large portraits of Mandela, engraving them onto the roof of iron sheet umbrella-like huts at his home. The huts are neat and have flowers all round them.

Mogapi, who registered his nonprofit organisation in October, felt blessed.

"I applied for funding after realising that I can do more to make the city beautiful."

Mogapi is self-taught and has no formal education.

"I feel like Mandela was my luck, I will continue respecting him," he said.

He said after Sowetan published his story more people started showing an interest in his work, resulting in the commission calling him.

"Most of them tell me that they saw me in the papers, some want me to go and decorate their homes as well," he said smiling.

He said he planned to create something beautiful to add to his paintings.

"To me it's not about the money, it's about people recognising my work.

"That idea only makes me feel like a millionaire," said the father of four, who lives in an RDP house.

"I have to come up with different ideas."

He concedes that Mahikeng has two parks that are not well-kept and maintained.

He needs to first get permission from the local municipality for the grant to be released.

"There are still a lot of things to be done in Mahikeng. It would be nice if I engraved Mandela faces at the entrance of a swimming pool. Our black children do not have such."