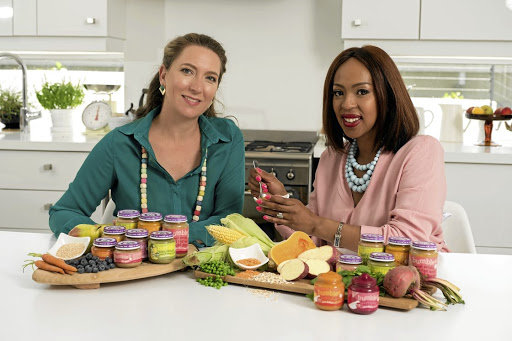 They say a journey of a thousand kilometres starts with a single step.

And this statement turned out to be true for Bumbles Baby Food, a local premier baby food company.

Who would have thought that a small idea that began at a garage would one day end up gracing shelves of some of the biggest retailers in South Africa?

The two women behind the brand, Nthabe Zondo and Billie-Clare Dryden-Schofield, have proven that if you are content with small steps you can go far.

The two are taking on the big boys, such as Tiger Brands, who have been dominating the market in this sector. Bumbles was started by Dryden-Schofield in a garage in Polokwane in 2009. After she was introduced to Zondo, who had vast experience in marketing products having worked with consumer goods company Unilever and Old Mutual, Bumbles was shaped into a brand.

When retailers began to show interest, Zondo was brought in as a partner, and ended up being a major shareholder.

According to Zondo, Bumbles has been carefully designed to meet the nutritional needs of babies of specific ages. Bumbles Baby Food sets itself apart from other baby food ranges by not adding preservatives, colouring, salt or sugar in the food.

Zondo, who is Bumbles's CEO, says they both wanted to produce the freshest, purest, nutrient-rich fruit and vegetables baby food. "We combine business experience with mothers' love and passion for healthy living to create SA's first locally made and superfood-inspired baby food range."

Teens who watch more than three hours of TV a day are likely to eat more than 500 extra junk-food snacks in a year‚ a new study shows.
Good Life
3 years ago

"We make our baby food with the same love and dedication as every mom makes it for their own baby: we peel, we chop, we blend and we cook! Each different variant has been created in our kitchen, more importantly, tried and tested by moms in the public domain."

The food range is available at Dis-Chem and Clicks nationwide, Checkers in Western Cape and Checkers Hyper in Gauteng. They recently sealed a Pick n Pay deal.

The company employs more than 80 permanent employees and casual staff.

Zondo says the biggest challenge is that the market they are tapping into is white dominated and that they are competing with big companies.

"We are competing with companies who have been in this field for years and have resources and funds. We would appreciate financial support from government."

Their biggest wish is to extend their rang and add toddlers' foods.

Zondo was born in Bloemfontein and went to a primary school in Lesotho. For her high school, she went to a boarding school in Mahikeng, North West, before going to the UK to study Tourism Management and International Relations.

When she returned, she worked for Sun International and Unilever before she went back to the UK to study for her
master's degree in Tourism Management.