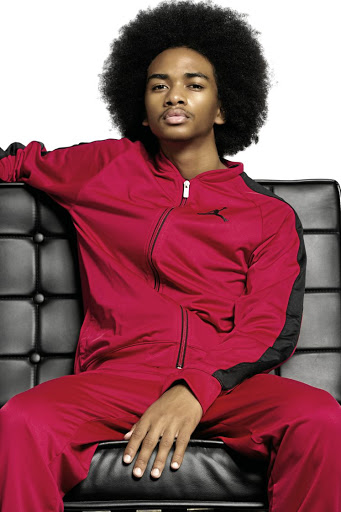 It's not only because of his signature Afro hairstyle in the 2010 film The Karate Kid.

But it's also in the 16-year-old firecracker's treatment of his music and highly unconventional approach to life.

"Just based on my look alone, a lot of people tell me I look like him [Smith]," Steero says.

"He's a cool guy. Sometimes I can see it, like once in a blue moon. I guess I should take it as a compliment."

Steero just dropped a hot new single Beastmode featuring rapper Proverb - a follow-up to his other songs Black is Beautiful and My Crush.

He regards the song as a bridge between old and new- school hip hop.

Steero describes old-school hip hop as the music his parents grew up listening to, including HHP, Prokid and Amu. "Proverb has been around since hip hop, in my opinion, was at its peak in the country. So the song appeals to both young and old-school people," Steero explains.

"The studio session was nerve-wrecking. It taught me a lot, because he knows what he's doing. It was very inspiring but intimidating at the same time. It was fun."

He is currently being homeschooled and it has been like that most of his life. He tried out high school when he was in grade 8 in 2016, but only lasted six months.

"Home-schooling is nice. It's based on everything that I'm working on right now. A lot of the time I'm focused on the music," he shares.

"I also do martial arts. I do Kung Fu. That's something that takes a lot of my time.

"So everything that I do career-wise is my curriculum. My plan is to build myself around my music because this is what I want to do."

He has been writing music since he was in grade 4, but decided to pursue it full-time in 2012.

Steero is scheduled to release his 12-track untitled debut album in October and features Kabomo and Proverb in some of the songs.