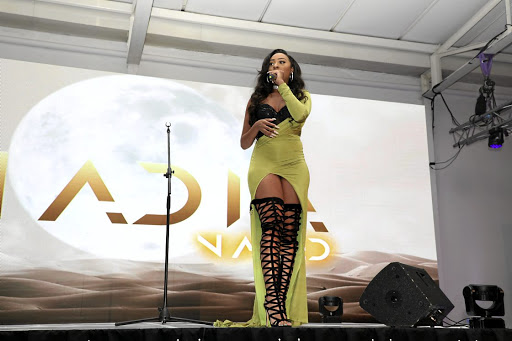 Rapper and songwriter Nadia Nakai revealed her nakedness at an exclusive album listening session at the Shine Studios in Braamfontein, Johannesburg, this week.

She came out guns blazing in a raunchy olive-green gown and thigh-high strappy heels in front of a massive LED screen as she gave the intimate crowd five dress changes and a look into her intimate videos and stellar performances.

Born Nadia kaNdaba, the 28-year-old artist admitted to having suffered from anxiety prior to the release of her debut album, Nadia Naked.

Two months ago she told Sunday World that producing the album was the hardest thing she had ever done.

The album, which she said took more than two years to complete, forced her to stretch her musical capabilities. For this reason, she named the project Nadia Naked.

"It was stressful, I am not going to lie. It was the hardest thing I've ever done in my life, working on an album.

"I've had anxiety attacks. It's the most stress I've been through yet in my life. I've been to university, studied and got my degree but it was nothing close to this," she said.

According to the rapper, finding her strength in vulnerability gave her a gateway into her thought processes.

"What comes hard to me is being vulnerable, writing songs that hit home and are relatable," she said.

Nadia is ready to push the envelope with her new album.
Entertainment
1 year ago

"I want women to see themselves in the stories I tell and I want to speak on different subjects from a woman's perspective. When you listen to my music it should feel like you are embodying me.

"It's like it is my happiest and worst place. It is my happiest place because I am making music but also my worst because it's stretching me. It's really pulling me apart.

"I've stretch marks, this pain of stretching, that is what I have gone through with making this album. I think that is why my perspective has changed completely on things that I thought I knew. I had time to really sit down and reflect and look at things."

She confessed that she had to give up certain life pleasures, like being on Twitter, for a while to focus on making her best work to date.

Her record label boss, Cassper Nyovest, industry friends such as DJ Dimplez, Kwesta and Lady Zamar were among the few celebrities rooting for her.

She said she felt that once people have heard the project she would be rid of the anxiousness.