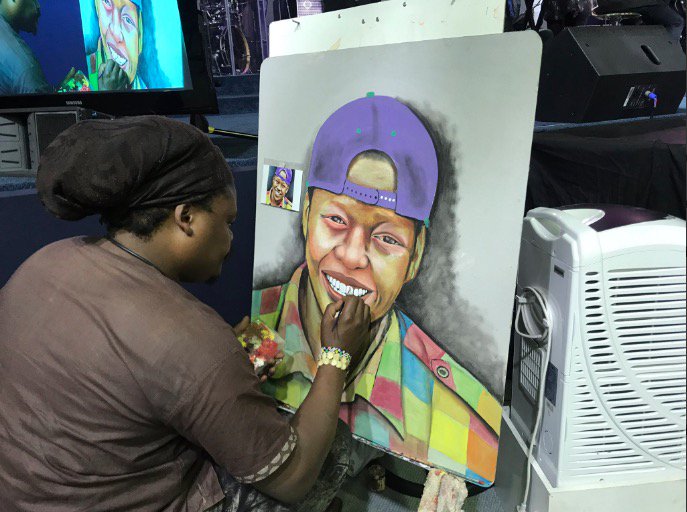 Celebrity funeral artist Lebani Sirenje has come under fire once again‚ this time for his depiction of TV personality Akhumzi Jezile.

Lebani has become well-known for paying tribute to late political figures and well-known personalities through his canvas at their memorial or funeral services.

As pictures of Lebani's unfinished portrait of Akhumzi emerged on Twitter‚ fans harshly criticised him.

Fans ripped the portrait to shreds‚ saying it was not a true reflection of Akhumzi and did not do the 'larger than life' personality justice.

It has been an emotionally-charged afternoon as those close to Akhumzi gathered at the Rhema Bible Church in Randburg to celebrate his life.

This is not the first time that Lebani has faced fierce backlash over his paintings. Last month Lebani's depiction of Winnie Madikizela-Mandela also caused an outcry on social media.

I'm a visual artist myself and theres no excuse of saying painting is hard thats not Akhumzi at all,dude must take his time to perfect this potrait.

When is the Ras gonna admit that he's just not cut out for this thing..... I agree this looks like Eugene from Trompies than #Akhumzi hai maan hei😂😂😂🚶🙆 https://t.co/Q3Pd8uvfGS

Akhumzi‚ who was killed in a head-on collision along with Siyasanga Kobese‚ Thobani Mseleni and two others‚ will be laid to rest on Saturday at Westpark Cemetery after a funeral service at Rhema Bible Church in Randburg.

Friends and family shared their most precious and fondest memories of Akhumzi Jezile at a memorial held at the Rhema Bible Church, in Randburg, on Thursday May 3 2018.