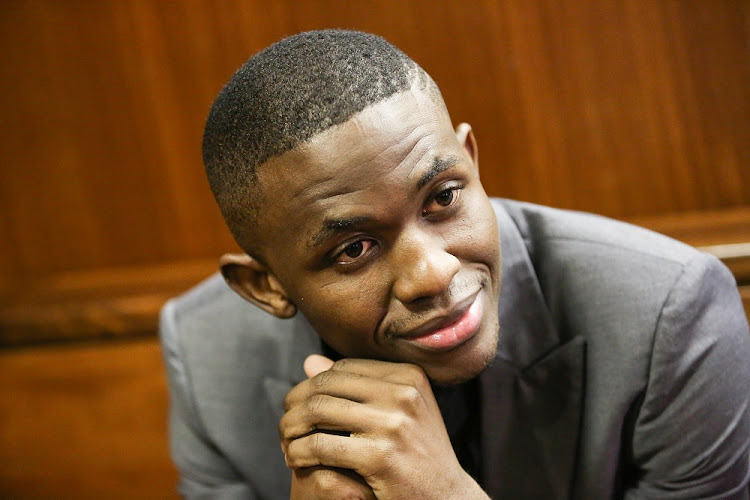 Sandile Mantsoe appears at the South Gauteng High Court for sentencing proceedings. Mantsoe was found guilty for the murder of his girlfriend Karabo Mokoena last year and was sentenced to an effective 33 years for assault, murder and the obstruction of justice.
Image: Alaister Russell/The Sunday Times

The South African Police Service's national commissioner‚ General Khehla John Sitole‚ says the conviction and 32-year imprisonment imposed on Sandile Mantsoe for the murder of Karabo Mokoena by the South Gauteng High Court proves the effectiveness of police and prosecutors.

Mokoena’s charred body was found in an open veld by a passer-by in Lyndurst‚ Johannesburg‚ on April 29‚ 2017.

This area is a few kilometers away from Mantsoe’s parent’s residence‚ Sitole revealed.

Mantsoe‚ 27‚ had denied killing 22-year-old Mokoena since her disappearance and he had even offered to assist with searching for her. However‚ in May 2017‚ Mantsoe was arrested and initially charged with the kidnapping of Mokoena.

Acting judge Peet Johnson on Thursday did not mince his words as he sentenced Karabo Mokoena’s killer‚ Sandile Mantsoe‚ to an effective 32 years ...
News
3 years ago

Gauteng’s Provincial Family Violence‚ Child Protection and Sexual Offences Unit (FCS) gathered evidence which led to him being charged with murder and defeating the ends of justice‚ for the murder of Karabo and the burning of her corpse‚ as well as for assault with intent to cause grievous bodily harm for a case Mokoena had reported in March 2017.

Sitole said: "The FCS Unit‚ the Forensic Science Laboratory as well as the National Prosecuting Authority have worked in close collaboration‚ which resulted in successful prosecution of Montsoe."

"We are confident that this lengthy sentence handed down on Montsoe will serve as a deterrent to those who may have any intention to commit crimes against women and children‚" the general said.

"The outcome of this case and many others is a true reflection of the effective and efficient collaboration of the police and the National Prosecuting Authority."

He urged members of the public to become active in combating this social scourge: "All sectors of our society must rise up and take a firm stand against crimes perpetrated on the vulnerable people of our country."

"The Acting Judge‚ Peet Johnson‚ was scathing in his words when he described Mantsoe as the 'devil in disguise' who will now be an outcast in the community and who deserves nothing less than a harsh punishment. This should send a stern warning to abusive men that the abuse of women and children is an abhorrence to society and perpetrators of such evil deserve no mercy‚" the ANC said in a statement.

The mother of Sandile Mokoena’s two-year-old daughter on Thursday took to the stand in the Johannesburg High Court.
News
3 years ago

"Although the final outcome of the case will never return to the Mokoena family their beloved daughter‚ we hope that the manner in which justice was served will contribute significantly to assisting the deceased’s family begin the long journey of healing and hopefully find closure.

"Karabo Mokoena’s tragic case has once again shone the spotlight on how the scourge of women and child abuse continues to be an endemic societal problem which requires all all sectors of society to stand up against."

The ruling party commended the South African Police Service and the National Prosecuting Authority "for the manner in which they pursued the case to ensure that the perpetrator faces the full might of the law".

The Commission for Gender Equality‚ meanwhile‚ said the killing of Karabo Mokoena has brought back the spotlight on intimate partner killings. "The commission hopes that this case sets a precedent in terms of consistency and swiftness in prosecuting gender based violence cases."

In addition‚ "We hope that this will assist persuade partners to learn alternative ways of resolving intimate partner conflicts without resorting to violence. We call upon all structures to work together in eradication of gender-based violence in South Africa."

Acting Judge Peet Johnson was scathing in his sentencing of convicted murderer Sandile Mantsoe for the killing of Karabo Mokoena, on May 3 2018. Mantsoe received an effective 32 years in prison. H...