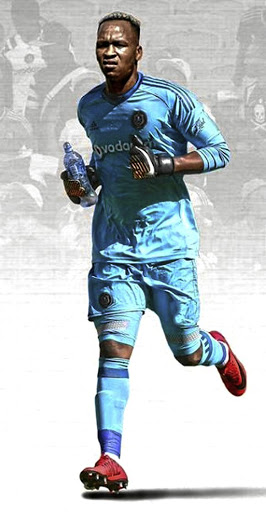 For six years, Brilliant Khuzwayo warmed the bench as Kaizer Chiefs goalkeeper and never vented his frustrations for a lack of game time.

Khuzwayo arrived at Chiefs in 2012 from AmaZulu and faced tough competition from Itumeleng Khune, who is SA's number one, now he's walked away and returned to Orlando Pirates, the club that developed him.

Speaking to Sunday World this week, the 28-year-old said he would once again adopt a professional approach at Pirates, the same way he did at Chiefs, and will fight for his place alongside Siyabonga Mpontshane, Wayne Sandilands and Jackson Mabokgwane.

"If you have a player who's not getting game time, sitting on the bench, still patiently waiting for his turn and working hard, those are the players that you need in a team," Khuzwayo reflected on his time in Naturena.

"Those are the players you would never find moaning and groaning about anything, but accept that whatever is happening is what it is."

During his six years at Chiefs, he played 37 official matches - an average of six games per season - and kept 23 clean sheets, which perhaps is a reflection of his abilities as a goalkeeper.

Despite the limited game time, the lad from Umlazi in Durban believes he contributed well whenever given a chance.

Rising star to earn R2.1m per month.
Sport
3 years ago

"So with all those stats, I believe I really helped the team."

On his new challenge at Pirates, he returns to familiar space having played for the Buccaneers' youth team over a decade ago.

"It feels great to be back at home, I'm really excited. I'm ready to work," he said, insisting that he's not fazed by the competition.

"When I decided to join Pirates, I was ready for anything. I'm here to learn from the other goalkeepers, all three of them. I believe that they are much older than me and I'll gain a lot of experience from them. I'm here to learn, I'm here for a new chapter in my life and I'm ready for it," Khuzwayo said.

* The Maimane Alfred Phiri (MAP) Games are coming to a close this weekend with the men's and women's semifinals held yesterday, and the finals taking place today at the Alexandra Stadium.