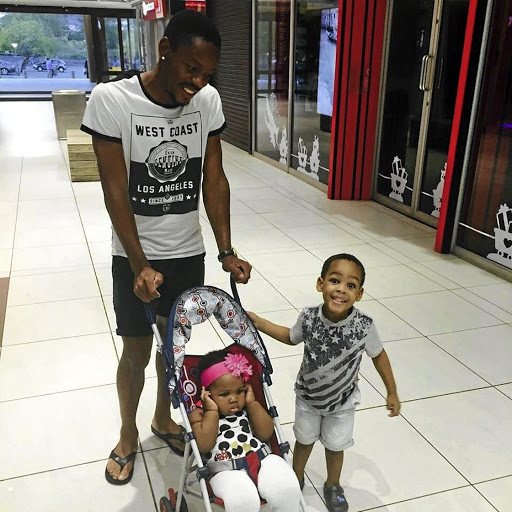 Polokwane City defender Thabiso Semenya takes time out to go shopping with his kids. Inset: Semenya is happy again with a new love, Petogo Mothiba, and is engaged to her.
Image: Supplied

Polokwane City defender Thabiso Semenya is one of the hardest working players, but he's also got his hands full off the field.

Semenya, 35, was the only footballer to play every minute of all 30 PSL league games last season and as much as he enjoys the game, he always makes time for family and friends.

He's also found love again after tragically losing his wife in a car accident two years ago when he was driving to Royal Bafokeng Stadium to watch his then employers, Platinum Stars, against Kaizer Chiefs.

Semenya is a man in love.

He is engaged to Petogo Mothiba and he's beaming again, so there's clearly more to him than just being a player who always puts in a good shift in defence.

When we caught up with him yesterday, he had been up for hours.

Once a Pirate always a Pirate?

Born in Moletjie, he was at the village just outside Polokwane preparing for his mom Esther's 60th birthday, but he also had a morning training session.

Besides his mother and siblings, he also has his hands full looking after his children.

"I'm very close to my kids and spend time with them most of the time, especially since they lost their mom [his late wife].

"They are familiar with me, so it's important that they see me next to them at all times.

"I take my kids to a restaurant and we also go to the park where they play," Semenya told Sunday World. "I love being at home, but sometimes I go out with the guys."

Semenya enjoys spending time off the field with his teammates, but he's also close to players from rival teams, like Letladi Madubanya of Baroka.

"He stays in Lebowakgomo [where Baroka are based] and when he wants to come around town [Polokwane] I'm always with him," said Semenya.

"So we talk Diski, but we also go out and enjoy some chesa nyama [braaied meat] together, especially when we don't have games like now since it was a Fifa break," he said.