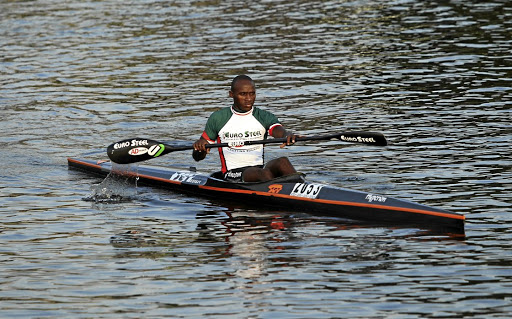 In the prestigious Duzi Canoe Marathon along the Msunduzi River from Maritzburg to Durban in KwaZulu-Natal, Ntondini's annual exploits have captivated every one around him and earned him celebrity status, after coming third last week.

And since those playful river-rafting days, Ntondini has risen to become a canoeing star, with the movie Beyond the River based on his life and that of his friend and canoeing partner Piers Cruikshank, a teacher at Kingsmead College in Rosebank, north of Joburg.

Ntondini works for an outdoor advertising company. Everyone acknowledges him and Sifiso Cebekhulu, his co-worker and childhood canoeing friend, who was also interviewed by the film's producers.

"My early paddling days began the day I met Ryno Armof. It was a chance meeting at the nearby filling station when he saw a group of boys loitering around. He asked whether we were interested in taking up paddling as a sport.

"We all agreed in unison that we would love to be trained as paddlers. With our little knowledge of canoeing, Ryno took us through our paces at the nearby Power Park dam.

"My mom was dead set against me taking part in water sports, she felt it was dangerous. Most importantly, we grew up with the notion from parents that there was a snake [mam'lambo], swallowing people at the Power Park Dam."

My chat with Ntondini is constantly interrupted by requests for autographs from him and Cebekhulu.

Born in Mount Frere in Eastern Cape in 1993, Ntondini and his parents have since relocated from their shack to a nearby RDP house. He, however, is now renting a house a stone's throw away in Power Park.

"What's the secret to being a good paddler?" I ask. "Not being fearful of taking chances in the fast-flowing water and steep rapids while finding your way among your competitors and reading their minds regarding their next moves."

Support from his CEO boss Brad Fischer, who also loves the sport, has done wonders for Ntondini. From position 365, in his first Duzi in 2011 as a teenager doing matric at Thaba-Jabula High School in Klipspruit, Soweto, Ntondini came third last week, winning gold with partner Sibonelo Khwela.

While he loves the water, he also adores his family and community. "Every medal I win, the film and its nominations are not mine alone, they are for my community and their struggle for proper housing. I mean people staying in shacks."

Shot in 2016 in Diepkloof and Durban, Beyond the River is described by the producers as having "captured the imaginations across the board with its touching true story, reaching across the racial and economic divide to achieve true friendship and partnership".

Ntondini never dreamt SA and the world would watch a big screen biopic based on his life as a township boy reaching his pinnacle as a top canoeist.

"My mom has every reason to be proud, I took her to watch the movie. She thought the water was not real, I laughed."

He's back and he wants the murder case of soccer star Senzo Meyiwa to be cracked immediately.
News
3 years ago
Next Article