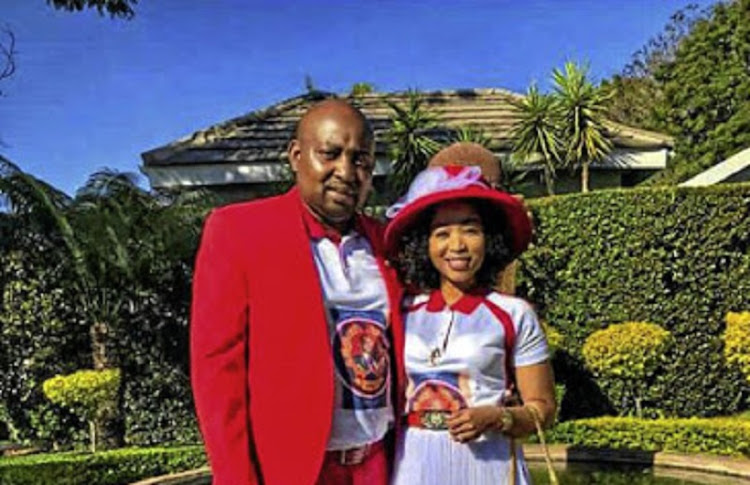 Leonard and his wife Masego.

Deceased IPHC leader Glayton Modise's second-born son, Leonard, has filed an intervening application in court to claim the leadership of the church, stating that he and his family were being haunted by his father, who had anointed him as his successor.

Leonard currently occupies the IPHC's headquarters, Silo, in Zuurbekom on the south of Joburg and leads the church as its "comforter", as the church's leader is fondly known.

His dead father haunted him so much that he even vacated his matrimonial bedroom, leaving his wife to sleep alone, according to court papers.

"Firstly, every night when I went to bed, my father would visit me spiritually," he said.

"He would repeat the phrase that I quoted above: 'stand up, man up for there is a lot of work to be done in the kingdom.' He would tell me to 'be strong. Leonard, you are leaving my sheep to go astray. God is not happy about it. He will break your neck'," Leonard recounted in his affidavit.

He said as a result of the visits by his late father he became so scared that he moved out of his bedroom, leaving his wife to sleep there alone.

In the same affidavit, Leonard said in another event he was told by his staff members in February 2017 that someone had visited his workshop and that the man said he was looking for the "comforter".

"This was a man who appeared to be homeless. I was told that he had been there before, but because I was not there, he had left. I spoke to the man. I do not know his name and had never met him before," reads his affidavit.

Leonard further said that the man told him that he had been sent by the founder (his grandfather Frederick) to tell him that he must take the throne.

He said the man had told him that they were exiled and that he must not forget about the legacy given to his family.

"I knew that the IPHC was in turmoil. A number of priests had approached me, begging me to ascend the throne.

"On 27 October 2018, I led a massive contingent of members to the church headquarters at Silo. Silo had been previously occupied by one Michael Sandlana," he said.

Before joining in on the court proceedings, Leonard had endorsed his elder brother, Tshepiso, to take over the leadership of the church.

Leonard - who is popularly known as Jakobo among his followers - had also submitted an affidavit confirming that he was in support of Tshepiso going against the decision by some of the IPHC priests and executive committee members who had approached him to lead the church instead of his brother.

A personal assistant at RW Attorneys confirmed that the law firm was representing Leonard on the matter but she said that the attorney working on the case was on maternity leave.

The Modise family spokesperson and Tshepiso's lawyer, Emmanuel Lekgau, confirmed that they received an intervening application by Leonard to join in on the court proceedings to determine the rightful leader of IPHC.

Lekgau said, however, the application was riddled with a lot of contradictions.