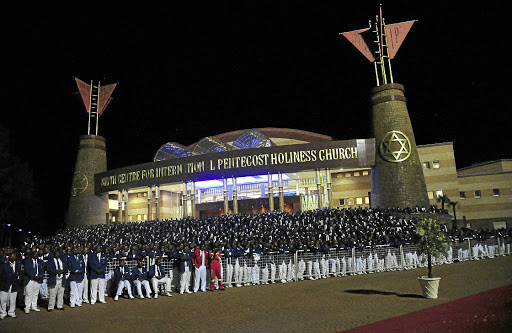 This comes amid a three-way leadership dispute over control of the three million- strong church membership.

Other pretenders to the throne include Tshepiso and Leonard, the two sons of the church's late leader Glayton Modise.

Modise, who inherited the church from his late father and founder Frederick in 1998, died in 2016 after suffering an undisclosed illness.

A legal dispute over his succession has been raging ever since his death. There had also been violent clashes between different factions within the church, leading to deaths in some instances.

Sunday World can reveal that Sandlana, who recently filed an application to join the court battle for the leadership of the church, commonly known as the Modise Church, has formed his own church named IPCC.

Sandlana's lawyer Bonisile Majavu, of Majavu Attorneys, confirmed that his newly formed church's bank account was blessed with IPHC funds that were held in trust.

As the church's leadership dispute were raging, all tithes and other income generated by the church was deposited and held in the Majavu Attorneys Trust Account.

Majavu confirmed the latest development and said Sandlana was ready to "define himself outside the Modise name".

Majavu also confirmed that an NPO called the IPCC was registered by Sandlana but said the developments did not mean that his client had abandoned his claim to the IPHC church leadership.

"He is still a party to the court dispute on the IPHC church leadership. Comforter Sandlana is still part of the IPHC church, including the Jerusalema branch [in Mabopane, Tshwane] where [he] is leading from," said Majavu.

Majavu further said that the registration of the IPCC as an NPO was to prepare for an event whereby the decision on the church leadership was not resolved early or probably not in his favour.

"The decision to register an NPO was taken after he consulted with his attorney, Zola Majavu, the council, priests and the congregation," he said.

The lawyer said that Sandlana had already taken his congregation to the land acquired by his NPO in Nigel, Heidelburg, where he planed to build a church structure to become its headquarters.

"The congregation, the priests and the council went to visit the land and they called it the journey Tsela ya Kanana [The road to Canaan]," said Majavu.

Majavu declined to disclose the amount that was transferred from their trust account into the IPCC's new bank account.

He referred all questions to priest Joshua Bambo, the spokesperson of Sandlana's faction.

2nd-born wants church to himself.
News
3 years ago

Bambo said: "If you are really interested in reporting about IPHC, come to Lesotho National Stadium tomorrow [yesterday] and witness over 30000 IPHC members in a special service being let [sic] by the one you despise and ridicule in your reporting at all times: his excellency; comforter; our father; The Lion King of Judah; Mike Sandlana."

Two senior IPHC members alleged that Sandlana took some money to buy the land in Nigel for his new church.

The current headquarters of the IPHC is located at Silo, Zuurbekom, south of Johannesburg and was currently occupied by Leonard while Tshepiso was running another IPHC branch in Springs, Ekurhuleni.