Munsieville Four get a lively funeral 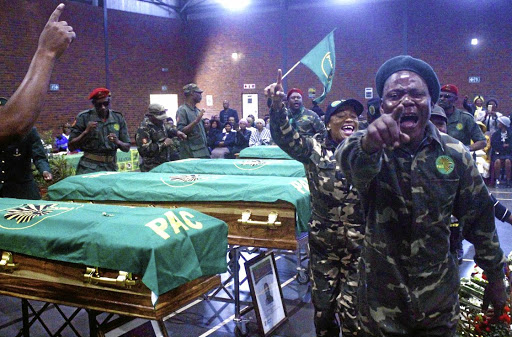 Members of the PAC, relatives and friends gathered at the Munsieville Sport Complex in Krugersdorp for the reburial of the Munseville Four who were hanged in 1964.
Image: Kabelo Mokoena

Funerals are normally a sombre affair but the reburial of the "Munsieville Four" was for their families and friends, a chance to celebrate their legacy and their brave fight against apartheid.

The four - Petrus Ntshole, Thomas Molatlhegi, Richard Motsoahae and Josiah Mocumi - who were reburied yesterday at Munsieville Sterkfontein cemetery in Krugersdorp were hanged by the apartheid government on June 16 1964.

Ntshole's sister Peggy Ntshoahe encouraged the crowds to sing happy songs to honour their bravery. She said this was to make up for the grief the families experienced when they had to bury their loved ones in 1964 under police guard and intimidation.

"In 1963, the Boers took these soldiers to John Vorster Prison and whenever we went to visit them we were turned back.

"Then came a day after a long time when we were allowed to see them ... I got into that dark prison [Kgoshi Mampuru] and hardly saw his face," she recalled a visit to her brother on the day they were hanged.

The emotional Ntshoahe said she failed to hold back tears as she saw her brother's cracked hands and sombre face after he was tortured by the police.

"He was darker in complexion, waiting for his last breath to be taken by a rope," said Ntshoahe.

PAC president Narius Moloto on Thursday called for a "new deal on land" so that the blood shed by the victims of the Sharpeville massacre would not ...
News
3 years ago

She said this was before an Afrikaner officer told them to wait for an unusual sound around 6pm, after which the relatives would know their loved ones had died.

After that sound she said tears just ran down her cheeks.

"We saw the first hearse coming out ... we had to go to Mamelodi cemetery [where the four were buried as paupers until they were exhumed by government last year].

"What a brutal burial! We were not allowed to sing, those officers threatened us when we tried to pitch a song. We buried them in total silence and tears," she recalled.

Ntshoahe told the crowd to rejoice with music now that the four soldiers were home, and at peace. 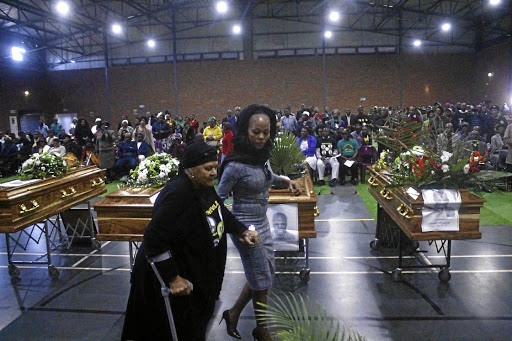 Peggy Ntshoahe, a relative of Petrus Ntshole walks past the coffins as she says her final goodbye.
Image: Kabelo Mokoena

Lazarus Molatlhegi who was only five years old when his father was hanged with his three comrades in arms, said he appreciated the government's efforts to return his father's remains to his family.

"When I went to see where they were killed for the first time in 2011, having to walk through the 52 steps [leading to the gallows] and reading the sad messages on the walls broke me. But I'm happy that my mother explained this before she passed on and I'm also happy to be standing here to bury my father in dignity.

"I never had enough chance to call him dad but I'm happy he's home," he said.

"His [Motsoahae] history was kept secret when we were growing up and we still don't understand why.

"But learning about this fallen hero lately, I found that he was a quiet person and a churchgoer, but was prepared to fight for his people against the apartheid regime," he said.

After family representatives finished with their speeches, PAC members covered the four brown caskets with the party's flag. PAC, EFF and Azapo members sang revolutionary songs in unity as they bid the cadres a final farewell.