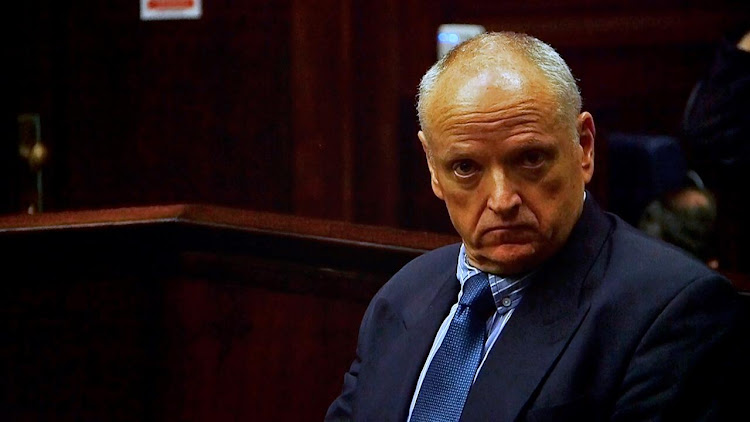 Cape Town businessman Rob Packham, who is accused of killing his wife Gill, pleaded not guilty when his trial got under way on Monday.

The Constantia resident is on trial at the high court in Cape Town. The prosecution has charged the former beverage production company manager with murder and defeating the ends of the justice.

Moore told the court that she raised the alarm in February 2018 when Gill did not arrive at work after 7am. She explained her numerous attempts to get hold of Gill, including through a secretaries' WhatsApp group, were to no avail.

Gill's cellphone was switched off and they had not met, as usual, on the way to work that morning. She also called Packham several times before he answered about an hour later.

Moore said she found Packham's statement that "he wanted to see the person on the other side of the [phone] line" bizarre. Packham had a "frazzled" look on his face when he arrived at the school.

"The deceased didn't arrive at the start time, which is 7.30am. I got worried and contacted her. She didn’t respond to the WhatsApp group that we're on," said Moore.

She reported Gill’s absence to the school's management around 8.15am and it was decided to send a school employee to her home. The person saw only a dog roaming in the garden when he peeped over the wall at the Packham house.

She then called Packham at 9am and his phone rang unanswered. She called his work number but was told he was not yet at work at 9.30. Moore even called the couple's daughter in Johannesburg to say she was looking for her mother.

The inquiry into murder accused businessman Rob Packham’s breach of his bail conditions lifted the lid on his odd behaviour, which included pestering ...
News
3 years ago

Packham answered his cellphone around 10.30 and said he was on his way to the school and "wanted to see who he was talking to on the other side of the line".

"When he came to the office, he walked straight to where I was sitting. We spoke about the deceased and her whereabouts. We knew she owned two flats in Claremont. We asked if he had checked the flats and he said he was the only one who had keys to them,” said Moore.

"And then he said he would go and check her favourite beach, Clovelly."

Packham did not want her to call management. "He said 'don’t bother them, I am fine'," said Moore.

Packham's counsel, Craig Webster, sought to poke holes in her testimony. Webster said that Packham had met the deputy principal in the passage.

"I understand from the accused that he met the deputy in the passage and that he was equally worried," said Webster. "So it is incorrect that he refused to speak to the management. He said he wanted to come and see who he was talking to on the other side of the line, he was starting the process of looking for his wife. [There is] nothing peculiar about it."

Packham allegedly killed his wife, put her body in the boot of her car and set it alight at the Diep River railway station.

According to the state, Packham was caught out by licence recognition cameras that showed him driving Gill's BMW, while cellphone towers showed that he drove around Constantia on the day of her disappearance. Gill’s charred body was found in the boot of the car. A postmortem showed that blunt force trauma to the head had killed her.

The high court revoked Packham's bail in December after witnesses complained that he had contacted them. According to the prosecution, Packham breached stringent bail conditions by sending SMSes to a mutual friend of his and his former mistress. The former mistress, who cannot be named as per court order, is a state witness.

The prosecution argued that by contacting the mutual friend, Packham indirectly tried to get to his former mistress.

A high court judge showed an alleged wife-killer tough love on Friday after he delivered flowers to his former mistress in breach of an order not to ...
News
3 years ago
Next Article