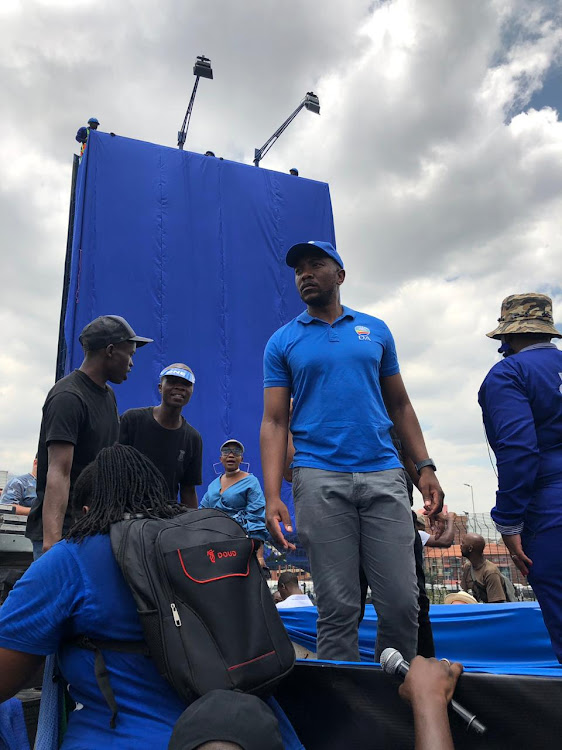 DA leader Mmusi Maimane before the unveiling of a party billboard in Johannesburg on Wednesday.
Image: DA via Twitter

Addressing a Human Rights Day rally in the Tambo informal settlement in Bekkersdal, Maimane said the ANC was not doing anything to solve the problems of South Africans, instead the party was becoming a problem to the citizens.

"There can be no human rights without jobs. How can you have a right to dignity when your child can’t go to school when it’s that time of the month, they can’t get sanitary towels?” he said.

He said families could not have dignity when they were living in single-room houses with four children.

'You want the lights back on, vote out ANC,' Mmusi Maimane tells voters

DA leader Mmusi Maimane on Wednesday took full advantage of the power crisis engulfing the country by urging voters to snub the ANC on May 8.
News
2 years ago

Maimane said the ANC could not be trusted to deliver jobs when they were failing to deliver electricity.

He said the party had failed because in areas like the Tambo informal settlement children had to play in streets filled with rubbish.

The DA leader slammed former Gauteng premier and current environmental affairs minister Nomvula Mokonyane for having sold out the struggle of South Africans for "braai packs and Johnnie Walker" and being responsible for the state of Bekkersdal.

In the lead up to the 2016 local government elections, Mokonyane was hugely criticised for having said the ANC did not need the "dirty votes" of protesting residents of Bekkersdal at the time.

"When I come to this community, I feel pain ....Our people are poor, they are dying of hunger. Our people don’t work, it’s hard here in Bekkersdal," said Maimane to a cheering crowd.

He said instead to doing everything in their power, today’s government leaders were living the high life.

He further slammed government bailouts to South African Airways and Eskom, saying his party would sell off the struggling airline and use the money to roll out services.

Maimane said should his party win Gauteng in the May 8 elections, the party’s premier candidate, Solly Msimanga, would prioritise the party’s policy on housing and set up a jobs and justice fund.

"I will not come and lie here and say ‘vote DA, next month you will all have houses’, that would be a lie. What I am saying is that put DA in power and we will give you a serviced stand, a title deed and give you money to build your own homes," said Maimane.