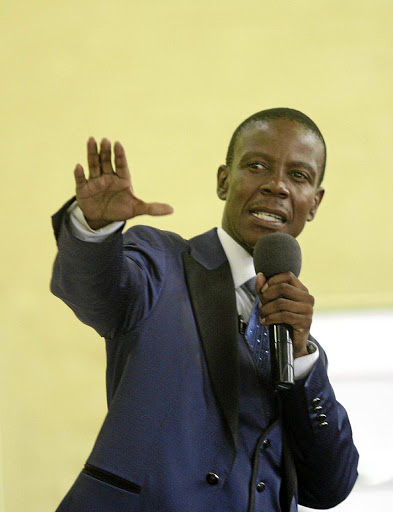 The office of the senior public prosecutor in Palmridge, Joburg has subpoenaed Absa to release the details of the beneficiaries allegedly fraudulently debiting money from the account of Incredible Happenings Church leader Prophet Paseka "Mboro" Motsoeneng.

This after the bank allegedly refused to give police officers details of the beneficiaries debiting money from his account without his authorisation.

The letter, written by Palmridge senior public prosecutor Kenny Ramavhoya, reads as follows: "This serves to confirm that a fraud case has been registered with the Alberton police by the complainant, Mr Paseka Motsoeneng. The case is against Absa and relates to several unlawful debits off [sic] Mr Motsoeneng's account totalling over a million rand. We have since given the police 205 subpoenas to get the details of beneficiaries of these debits so we can institute prosecutions."

Absa spokesman Songezo Zibi said the banking group would co-operate with the investigation. "If the Reserve Bank or Financial Intelligence Centre or the police ask for such information we always co-operated because it is not the bank that takes money from the account.

"We release that information on a daily basis and there was no way we could have refused to co-operate with the police on this matter," Zibi said.

Mboro said the prosecutor subpoenaed the bank to release the information because it refused to co-operate with the police who wanted details of those who debited money from his account.

"They refused to co-operate with the police; that is why they are being subpoenaed. I would have not opened a case against this bank, but I had no option after several meetings that I held with senior managers yielded no fruits," Mboro said.

He said he ended up not paying for vehicles, sound systems and cameras that were financed by Absa in protest of the bank's refusal to stop the fraudulent debit orders.

"I ended up in arrears but after realising this might destroy my good name, I settled all the arrears. But they proceeded to take me to court. [Tomorrow] we are going to South Gauteng High Court to fight this matter."

Prophets agree to stop crucifying each other.
News
4 years ago
Next Article