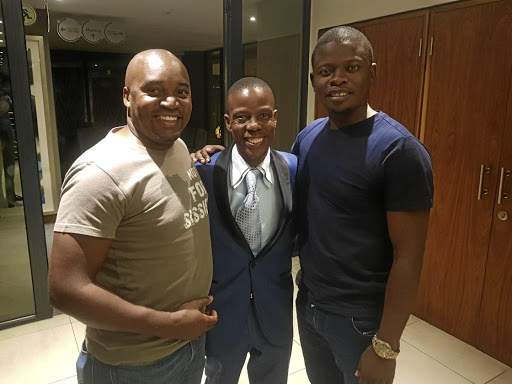 Bushiri and Martin, who have been warring since 2016, buried the hatchet at a hotel on Thursday.

Bushiri apologised to Martin for the prophecy on his wife and also asked for forgiveness for the prophecy that suggested that Martin's mother was a witch who cast a spell on his sickly child.

Martin also apologised to Bushiri for his controversial Facebook posts against him and agreed to withdraw intimidation, assault and defamation charges.

Bushiri said: "In 2016, his wife came to church and I prophesied her after she complained that she had personal problems.

"I prophesied that her child was sickly because of the sangoma spirit he got through the help of Antonio's mother. Antonio started running a Bushiri Must Fall campaign and threatened to disrupt my church services and many of my church members stayed away from church because they were terrified of his threat," he said.

Bushiri said he announced in church that congregants shouldn't be scared to come to church as God will do anything against Martin to protect them.

" He then opened a case of intimidation against me. One day when I was having a meeting at a hotel he came with the police with a gun in his hand and demanded to see me but my bodyguards told them I would only cooperate if Antonio leaves. And that is where there was a scuffle between my bodyguards, the police and his guys."

Bushiri said Martin also used his picture in one of the anti-fake prophet marches organised in Tshwane this year.

"I went to court and applied for a court order to stop him from using my name," he said.

"[Last week] we met and I apologised for that prophecy because prophecy is not supposed to destroy people. He called his mother in my presence and I spoke to her and apologised to her too," he said.

Martin said: "I have already started the process to withdraw the cases against him and he too agreed to pay for my legal costs for my divorce."

Mboro said he initiated the peace negotiation as part of his #Mboro50 campaign which is aimed to unite warring parties.

"The peace between Bushiri and Antonio is good for their images, their businesses and the image of God. I'm happy I could help," he said.

Pastor Mboro believes he can 'help you get the land back'

Pastor Paseka "Mboro" Motsoeneng is all about uplifting the community and recently announced that he will not only be building 50 houses for people ...
Lifestyle
4 years ago
Next Article