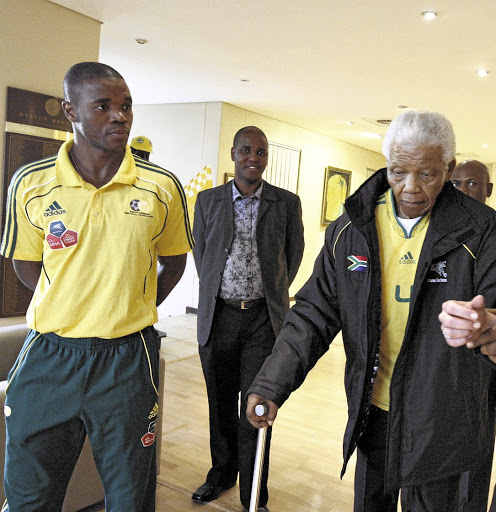 Mokoena remembered his meeting with Mandela this week as the nation commemorates the fourth year since the death of the former president and freedom fighter.

The former national team and English Premiership player has now been appointed an ambassador of the annual Nelson Mandela Remembrance Walk & Run scheduled to take place at the Union Buildings in Pretoria today.

"The day I met Tata Mandela was when I went to visit him at the [Nelson Mandela] Foundation. We had a one-on-one and what he said to me was something I will never forget.

"He told me that the power is in my hands to make a difference and that I have to go out and make it. This has stayed with me throughout my career. I will always uphold his legacy," he said.

A group of South Africans have become embroiled in an investigation into the disappearance of R6-million from the coffers of a UK church and its ...
News
4 years ago

Mokoena went on to play for his country in more than 100 international games, some of which he was captain. He also played for English clubs Blackburn Rovers and Portsmouth.

He will be taking it easy at the event today with a 5km walk because "the Mrs isn't much into sports, that's why I decided to do the walk with her".

Another ambassador, Zambian great Kalusha Bwalya, said he was honoured to be part of the occasion.

Former president Nelson Mandela's legacy will continue to be undermined if business leaders and politicians implicated in state capture allegations ...
News
4 years ago

"He [Mandela] was a great man whose legacy shines bright in our country. This is a celebration that means so much not only to me but to everyone else in the world," said Bwalya.

"The work Tata Madiba did goes far beyond South Africa, he was a hero of our time and touched many people's lives. He was always seeking freedom for South Africa and other African countries," said Bwalya.