The man who has it all 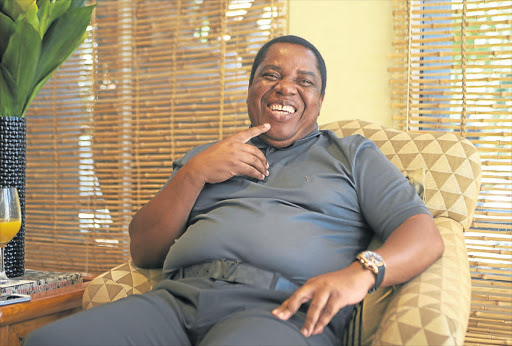 Robert Gumede has no reason to be apologetic about throwing a costly birthday party last week, writes Babalwa Shota

This is how IT mogul Robert Gumede rationalises spending millions of rands in celebration of his 50th birthday.

Last weekend, Gumede pulled out all the stops when he hosted a three-day extravaganza that included a ladies' high tea, a VIP gala dinner, a free concert for 65000 people and a specially created theme park for more than 7000 children in Nelspruit, Mpumalanga.

The big weekend was organised by celebrity events planner and fashion designer Gavin Rajah, who transformed Nelspruit Rugby Club into an enchanted garden with local and indigenous flowers, as well as some flown from the Netherlands and Singapore. Guests included celebrities and the wealthy elite such as Durban businessman Vivian Reddy and wife Sorisha Naidoo, politician Mathews Phosa and wife Pinky, comedian David Kau and wife Thalia and Gumede's long-time friend and business partner, defence contractor Ivor Ichikowitz.

A production about his life was also staged, starring actors Kenneth Kunene and Rapulana Seiphemo. "That brought tears to my eyes," says Gumede.

But it was Saturday's family day that he singles out as the most meaningful day of the three as it helped him relive his childhood differently.

"I was born and grew up under apartheid. In the Lowveld we had the equivalent of the Rand Easter Show which takes place annually in August. During our time they would bring the merry-go-round and nice games. As black people, we were only allowed to come on the Wednesday. The rest of the week until Sunday was for whites only.

"Now I realise why they got us to come on the first day; they had to make sure the machines worked. And what better way than to arrange for black people to come and enjoy the rides?" reminisces Gumede, who attended the fair just once.

"Now that I can afford this, I can relive my life. And the best way to do that is by inviting 7 000 kids to come and enjoy. That was the best part of the weekend because I took the games and the circus into the township, something that has never happened. They enjoyed 30 minutes of fireworks for the first time in the the township."

Sitting in a plush armchair at the Saxon Boutique Hotel in Joburg, Gumede, wearing steel-grey Louis Vuitton everything, says it's about time black people celebrated their success openly.

"If you have money, you wake up every morning, you go to work, government takes 40% of your PAYE (pay as you earn), and 30% of your profits, then you've paid your dues.

"You have not stolen from anyone and you have the right to do as you please with your money. When I celebrate, I'm not celebrating for other people to see me. I celebrate myself," says the billionaire, who received a 12-seat Challenger 604 private jet from his wife, Portia, and kids.

He also took possession of a Chopard watch from André Kimbuta, governor of Kinshasa in the Democratic Republic of Congo. On giving him the present, Kimbuta announced: "This could feed 5 000 of the people here."

Gumede defends flaunting his wealth, pointing to his philanthropic work that formed part of the birthday weekend.

"I know many South Africans - white South Africans - who spend tens of millions celebrating their birthdays. They go to exotic islands, hire planes and take guests. That is never an issue. It's high time black people understood that if you pay your dues to the state and it's monies that you worked hard for, you have every right to buy the nice exotic car, educate your children and build the nicest home for you and your family. And you have a right to decide to donate some of those monies to others."

Gumede gave away two houses to children. One of the children who won a house in the raffle is a seven-year-old girl who Gumede says reminds him of himself because "I started work when I was seven, carrying golf bags bigger than me".

He has also put aside R40-million from the family trust for university scholorships for kids from Mpumalanga.