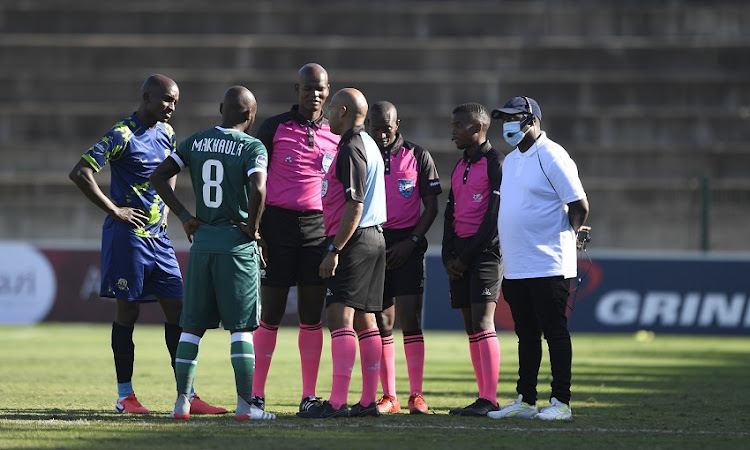 Marumo Gallants can expect the rule book to be thrown at them for misconduct and bringing the Premier Soccer League (PSL) into dispute after their away match against AmaZulu had to be abandoned because the Limpopo club failed to travel to Umlazi with  an alternative kit.

The DStv Premiership match at the King Zwelithini Stadium was abandoned nine minutes into the first half after the home bench, players and officials complained that the teams wore similar colours.

Officials could be heard telling the match commissioner that they were struggling to make offside calls due to the colour clash.

Gallants announced at the beginning of the season that their home kit was navy blue, and the away kit green, while the alternative jersey is gold, but the club decided to travel to KwaZulu-Natal with only their green strip, which clashed with AmaZulu’s home colours.

Usuthu apparently refused to accommodate their visitors and change into their alternative kit, which is white, but they were well within their rights as the home club.

Another contributing factor was that there were  going to be problems if the match, which kicked off at 15h30, was delayed any further as there are no floodlights at the stadium.

PSL prosecutor Nande Becker confirmed to TimesLIVE shortly after the match was abandoned that he would launch an investigation.

Becker was seemingly not aware of the incidents unfolding in Umlazi as he sounded surprised when called for comment.

“It sounds strange to me,” said Becker on Wednesday.

“Kit [arrangements] need to be communicated in the prematch meeting a day before [kickoff].

“I will email the parties involved. I will investigate the matter and hopefully by 5pm tomorrow [Thursday] we will know what happened.”

Asked if he has had to prosecute a similar case in the history of the PSL, Becker said: “It is possible that it might have happened before but this is the first one for me.”

According to rule 17.2 of the NSL Handbook, under the heading colours and numbers of team outfits, “Both member clubs must take their official team outfit as well as their alternative team outfit to all matches.”

Rule 17.3  that “the onus is on the visiting team to ascertain the colours of the home team for a particular match.”

The PSL released a statement almost two hours after the match was abandoned, and said the fixture had been rescheduled to Thursday November 4 at the same time and venue.

“The PSL is awaiting the match commissioner's report which will be referred to the league's prosecutor,” reads the PSL statement.

“The league wishes to apologise to our broadcast partner SuperSport [who have agreed to broadcast the match], our sponsor DStv and fans for this unfortunate incident.

Studio anchor for broadcaster SuperSport TV Carrol Tshabalala, hosting former players and analysts Teko Modise and Dikgang Mabalane, said the colour clashes were not only problematic for players and officials but for them as well as the broadcasters.

“We were struggling to differentiate between the players,” said Tshabalala. “It is perplexing because officials from both sides and the PSL hold a prematch meeting to see the colours of the kit.”

Former Mamelodi Sundowns and Orlando Pirates star Modise said the incident was embarrassing for the PSL.

“AmaZulu are the home team and they can come out and say this is our home kit and we are not going to change it. They are within their rights so it is going to be very interesting to see what the PSL does with this match.

“Honestly it is something that we should not be seeing with the top league that we have.”

Reporting from the pitch side at the stadium, Thato Moeng said she could hear confusion from both benches over the colour clashes.

“In fact at some point I heard someone shouting green and you wondered which green?” Moeng said.

AmaZulu media officer Brilliant Makhathini could not be reached for an official comment.