Ncikazi laments the opportunities his Pirates charges missed against City 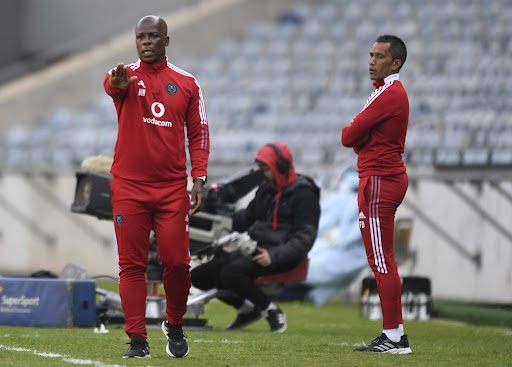 Orlando Pirates failed to continue pressing Cape Town City high, as they had in the opening half of their 1-1 DStv Premiership draw at Cape Town Stadium on Saturday, Bucs coach Mandla Ncikazi lamented afterwards.

Ncikazi added that, once pressed back and playing too deep in the second 45 minutes, Pirates then also failed to effectively counterattack.

In the clichéd “game of two halves”, Bucs took the lead through Happy Jele’s 13th-minute headed goal, though Ncikazi felt Pirates then also should have made more of their first-half dominance.

City, with coach Eric Tinkler changing from three to two centre-backs from the break, increasingly had the advantage in a second half where Mduduzi Mdantsane equalised from the penalty spot in the 54th.

“I’m highly disappointed about the result. I thought the dominance in the first half, and the dominance of possession, should have given us the result,” Ncikazi said afterwards.

“Maybe lessons going forward that possession for possession is not good enough – it must turn into opportunities to score.

“In the second half I thought, whether it was planned by the opponents or it was an enforced change of their centreback, worked in their favour and against our structure.

“I thought structurally we were very solid in the first half. But I don’t think we stayed in that structure in the second half, based on how the opponents changed.

“And the enforced change on our side of Olisa Ndah, the new centreback, did not help our cause.

“But the biggest downfall, I thought, was that we wanted to press as high as possible, which we did in the first half, but in the second we kept dropping the line of confrontation, which maybe also resulted in a penalty.

“When you defend that deep in your half, no matter the structure, you are going to make a mistake here and there. And I thought we tested that too much."

Ncikazi was asked why Pirates were unable to adapt to City’s change from three to two centre-backs in the second half, and found themselves pressed back.

“To be blunt we failed to adapt to their tactical structure, and we changed our own,” he said.

“I don’t think this was how we planned to play in the second half. We never planned to drop the line of confrontation that deep into our half.

“But it happened, and I thought that was just the biggest failure. Maybe, again, if you find your team in that position and you are playing in your half, then have the capacity for successful transitions in attack.

“Or, if you are in your opponents’ half and dominating possession, then counter-press, which we did in the first half. But in the second half, although we dropped into our half, the capacity to come out on transitions was not as one would have loved.”

Pirates’ next fixture is the first leg of their Caf Confederation Cup second round tie against Congolese outfit CSMD Diables Noirs in Brazzaville, after the Fifa international date on Friday, October 15.