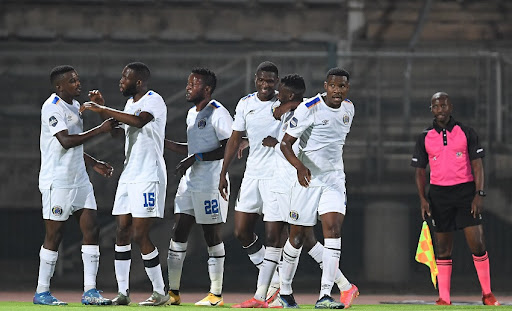 Thatayaone Ditlhokwe of SuperSport United celebrates his goal with teammates during the DStv Premiership match against Maritzburg United at Lucas Moripe Stadium in Pretoria on September 25 2021.
Image: Lefty Shivambu/Gallo Images

SuperSport United defender Thatayaone Ditlhokwe has urged his teammates to focus on the future rather than to dwell on the team's past successes as his side prepare to take on struggling Chippa United at Sisa Dukashe Stadium in East London.

The Botswana international who scored late in their 2-1 victory against Maritzburg United a week ago says his side should extend Chippa United’s woes and not allow them a win in the DStv Premiership clash.

The Gqeberha-based outfit has only recorded one victory in the last four games of the season.

“I scored a goal and that is in the past. I am now looking forward to the next game against Chippa,” said Ditlhokwe.

“We want to collect another win. We are gaining momentum and want to make sure that we collect the three points.

“So far, so good. We want to keep on winning games and collecting points.”

Their hard work attitude saw them occupying position two (with 11 points) on the Premiership table below crosstown rivals and four-time successive victors Mamelodi Sundowns, who are in the driving seat on 13 points.

United will rely heavily on players such as Teboho Mokoena, Williams, Iqraam Rayners, Ditlhokwe and the big centre-forward Thami Gabuza.

Good news for coach Kaitano Tembo’s charges is the return of young centre-back Luke Fleurs, who has served his two-match suspension.