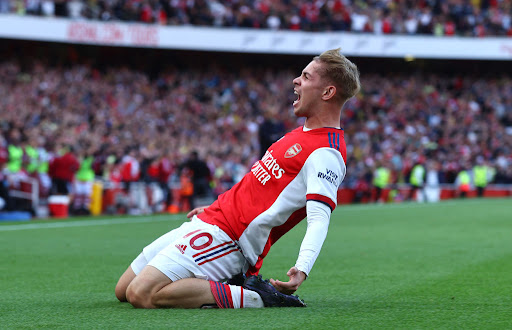 Arsenal's resurgence continued with a 3-1 victory over arch-rivals Tottenham Hotspur as the two north London clubs continued to move in opposite directions in the Premier League on Sunday.

Goals by Emile Smith Rowe, Pierre-Emerick Aubameyang and Bukayo Saka crowned a majestic first-half display by Arsenal who were sharper and hungrier than a listless Tottenham side.

Smith Rowe swept in Arsenal's opener in the 12th minute and then set up Aubameyang in the 27th minute and when Saka made it 3-0 in the 34th minute the hosts were running riot.

There was a little more fight about Tottenham after the break and Son Heung-min pulled a goal back with little over 10 minutes remaining, but it was too little too late for the visitors whose early-season optimism has evaporated.

Arsenal, who were bottom after three games, are now in 10th place with nine points, ahead of Tottenham on goals scored.