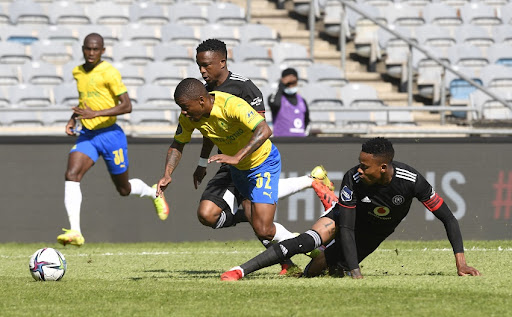 Peter Shalulile had two clearcut chances, and the deadly Namibian scored from both as Mamelodi Sundowns put in a tactical, workmanlike shift to outmuscle Orlando Pirates 2-0 in Saturday’s DStv Premiership clash at Orlando Stadium.

The trademark quality strikes from Shalulile came in the 54th and 72nd minutes, as Downs edged play and chances.

This fixture between the country's style merchants is known for almost always providing fireworks. With both teams unbeaten in the league – Sundowns with three wins and a draw, Pirates winning two and drawing two – Saturday's game was much anticipated.

Downs have dominated recently winning five out of 11 match-ups against Pirates, with Bucs winning two. The Brazilians continued that trend.

The two teams' consistency in line-ups also held promise for a good encounter.

Pirates coaches Mandla Ncikazi and Fadlu Davids made two changes from their 3-1 away win against Chippa United. Terrence Dzvukamanja and Deon Hotto came in for Ntsako Makhubela and Kabelo Dlamini.

Sundowns' coaching trio made one change from their 3-0 home win against TS Galaxy, Thabiso Kutumela brought into the front line for Gaston Sirino.

But the lack of a crowd seems to have subdued Pirates-Downs to some extent. Saturday's encounter was more a tactical chess game than action-packed.

Sundowns played the percentages superbly, and were dangerous when they probed.

With this kind of efficiency four-time successive champions Sundowns are the early odds-on favourites again. Pirates still have work to do.

Downs came out seeking the spaces around Pirates’ area from the start, Happy Jele dispossessing Thabiso Kutumela in the area, then the tricky forward striking over the bar teed up on the edge of the box by Themba Zwane.

Vincent Pule's cross-cum-lob was onto the top netting for Bucs. Kutumela curled another effort round the right upright.

Pirates suffered a setback when Dzvukamanja limped off just before the half-hour, replaced by Makhubela.

A quick movement from Pirates ended with Pule threading Bandile Shandu down the right to force a sharp stop from Denis Onyango from a tight angle.

Shalulile had a quiet first half, but it just takes the striker one chance to make a difference.

That man Kutumela shrugged off two markers – Goodman Mosele, who had given the ball away, and Paseka Mako – on the right and crossed low, Shalulile hitting powerfully first time, in off the bottom of the crossbar.

Lyle Lakay struck into the side netting soon after the goal, as Downs increasingly muscled an advantage.

But Pirates were still in the game too, Pule turning a marker on the right and squaring, as Rushine de Reuck's intercept deflected at goal, Onyango having to make a reflex save.

In a healthy conversion rate, Shalulile added a another from his second opportunity of the game, getting on the end of Lakay’s cross from deep on the left, chesting down, and producing another quality finish past Siyabonga Mpontshane.