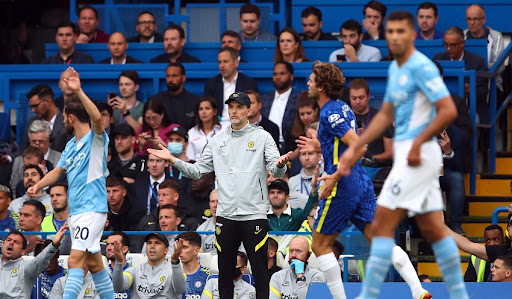 Thomas Tuchel admitted his Chelsea side were not good enough in a 1-0 home Premier League defeat by champions Manchester City on Saturday which ended Chelsea's unbeaten start to the season.

Chelsea's 5-3-2 formation was designed to frustrate City but offered little other than defensive solidity until Gabriel Jesus broke the deadlock with a shot on the turn in the 53rd minute.

City, who had lost all their meetings with Chelsea since Tuchel took charge in January, including the Champions League final, would have won by more but for home keeper Edouard Mendy.

"We lost the game and City deserved to win. Until the goal we were very strong in the last 20 metres of the field, but only there unfortunately," Tuchel told reporters.

"Everywhere else we were not good enough to relieve pressure and to hurt them. The performance was not complex enough.

"Overall, simply, we were not at our best level."

Chelsea did try and raise the tempo in a bid to salvage the game but it was too little too late and Tuchel was asked why he started the game with such a cautious approach.

"We can debate and we won't have the answers. We played 5-3-2 but I don't think it was the structure," he said.

"It was a matter of adapting to the opponents' spaces. We tried the system to have connections in the build-up. We win together and lose together. I will ask questions of myself."

Chelsea striker Romelu Lukaku hardly got a look in apart from one effort that was disallowed for offside.

"I don't think we need to talk about Romelu because when the ball reached him the attack was half over because there was no connection. It wasn't a Romelu problem," Tuchel said.

City produced their best display of the season, pressing the ball relentlessly and smothering the home side who failed to register a shot on target.

"It's just three points, but the way we played was so good."

For City it was the perfect boost ahead of their midweek Champions League clash with Paris St Germain.

"It's a good way to start this fascinating week that we have ahead of us," Guardiola said.