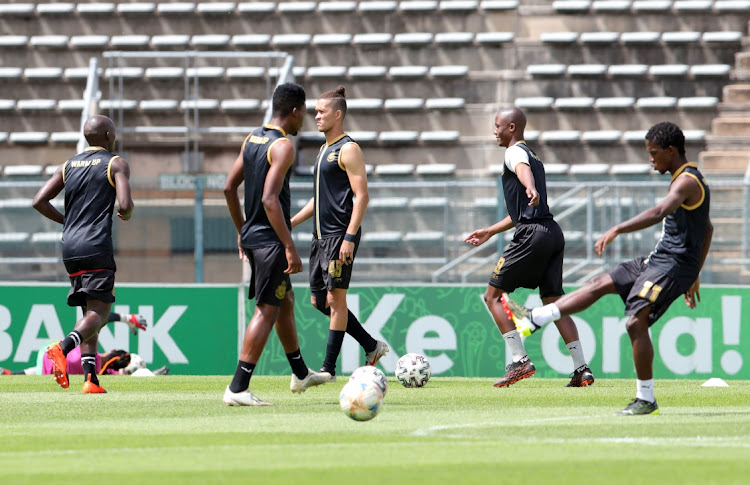 Royal AM players warming up before the Nedbank Cup, Last 32 match between Pretoria Callies and Royal AM at Lucas Masterpieces Moripe Stadium on February 05, 2021 in Pretoria.
Image: Samuel Shivambu

Despite Royal AM’s hopes of automatic promotion to the DStv Premiership being dismissed by Johannesburg high court judge Leonie Windell, the club hierarchy are refusing to throw in the towel as they plan to go as far as the Constitutional Court.

Yesterday, Windell also dismissed the attempt by Royal to have Premier Soccer League (PSL) acting CEO Mato Madlala charged with contempt of court. They accused the PSL of being in contempt of court by not halting the promotion and relegation playoffs last month.

Royals refused to participate in the playoffs as they took their fight with the PSL to courts, giving their opponents Chippa United and Richards Bay a walkover.

Their application was dismissed with costs.

But Eric Mabuza, the attorney representing the club, said they will go as far as the Constitutional Court to appeal the decision.

“The purpose of this letter is to inform you again that indeed we hold instructions immediately to pursue appeal proceedings in the higher courts,” a letter from Royal to the PSL reads.

“In the next few hours and after reading the judgment in greater detail a decision will be taken as to whether to lodge Royal AM’s application for leave to appeal to the Supreme Court of Appeal and/or directly to the Constitutional Court given the nature and the urgency of the issue.

“In the circumstances, it should be self-evident that the NSL is not entitled to conduct itself as if the above-mentioned judgment is the final word and thereby violate or undermine Royal AM constitutional rights including its right to appeal or to have a dispute finally resolved by courts.

“This will obviate any need for any further litigation to prohibit the NSL from doing so, which will be instituted in the event of non-compliance with the duty to respect Royal AM’s rights.”

Meanwhile, as soon as the court application was dismissed, the PSL released the fixtures for the upcoming season.

The campaign will kick off with the MTN8 on August 14, with the DStv Premiership matches to follow a week later.

Mamelodi Sundowns will begin their defence of their title against last season’s runners-up AmaZulu in Pretoria on August 20. The following day will see five matches, with newbies Sekhukhune United to host Chippa United.

The first Soweto derby between Kaizer Chiefs and Orlando Pirates will be played at FNB Stadium on November 6, while the second round is scheduled for March 5 at Orlando Stadium.

Royal AM's attempt to have acting Premier Soccer League (PSL) CEO Mato Madlala and the league held in contempt of court for the playoffs matches ...
Sport
1 month ago

As Royal AM continue with their protracted promotion and relegation battle in the courts against the Premier Soccer League (PSL)‚ Sports Minister ...
Sport
1 month ago

Royal AM’s lawyers: PSL can be in contempt of court if DC continues

Royal AM have stated their intention to ask for a postponement of their hearing in front of a disciplinary committee (DC) on Saturday‚ but Premier ...
Sport
2 months ago
Next Article