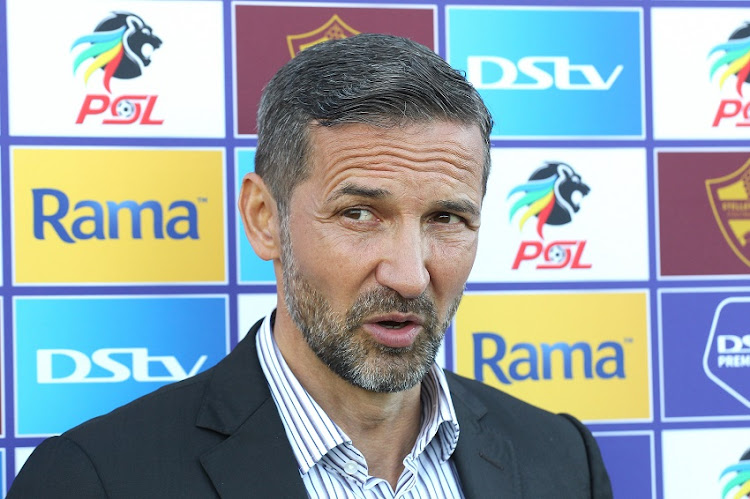 Orlando Pirates coach Josef Zinnbauer has responded to a planned march to call for his head saying he hopes there are enough Bucs supporters seeing the positives from his first full season as head coach.

Pirates’ 4-0 second-leg defeat to Raja Casablanca in Morocco on Sunday for a 5-1 aggregate exit from the Caf Confederation Cup quarterfinals provoked much vociferous backlash from Bucs fans already disgruntled at their team’s increasingly poor finish to the 2020-21 season.

Having been tipped to push Mamelodi Sundowns all the way for the DStv Premiership Pirates are in fourth place with four games left. A defeat or draw to second-placed AmaZulu at Orlando Stadium on Thursday night will effectively end Bucs’ chances of second place to four-time champions-elect Downs‚ and a coveted Caf Champions League place.

Like Kaizer Chief’s supporters‚ who marched to that club’s headquarters in Naturena this month to protest Aamakhosi’s under-performance of the last six years‚ Buccaneers fans online have organised a protest. They plan to march against Zinnbauer continuing as coach in Soweto on June 5.

Asked how he responds to calls for his head‚ Zinnbauer said: “It is always like this that you have some supporters who are upset after games that you have lost. It’s totally normal – I can understand the supporters.

“But you have the other side of the supporters who give you positives. Don’t forget we won a title this year‚ we went through [the Confederation Cup] group stage‚ and were in the quarterfinals.

“Yeah‚ you can say all the negatives and always find the negative points. But we see the other side also.

“The experience for the players [in the Confed]. Success is not always the first point that you have in a team‚ especially in these Covid times‚ and how many games you have now‚ and how many injured players.

“And then you have to learn from these mistakes that you made‚ as a coach‚ as a squad. And then you go forward and then it’s all happy when we get success.”

Zinnbauer was asked about the plans being made on social media for a protest against his continuing as coach.

“Yeah‚ it’s not only in Africa – it’s like this in the whole world. You look at England‚ to Germany‚ it’s always that when you have lost games the supporters are upset‚” Zinnbauer said.

Even with a first trophy won for Bucs in six years in the MTN8 in December‚ it may take finishing second in the league to preserve Zinnbauer’s job‚ where a win against AmaZulu would bring Bucs within striking distance of four points behind Usuthu but with a game in hand.

“They are a strong team at the moment‚ have very successful players on the pitch‚ they have points‚ and it’s a good game for us‚” the coach said.

To reel in third-placed Lamontville Golden Arrows or AmaZulu Pirates will need to improve dramatically on their recent form. They have won once in eight matches in all competitions‚ though in the league have won twice in five games.

The Pirates supporters’ protest march to Orlando Stadium‚ from 9am to 1pm‚ is planned to coincide with Bucs’ final Premiership fixture against Tshakhuma Tsha Madzivhandila‚ kicking off there at 3pm on Saturday‚ June 5.