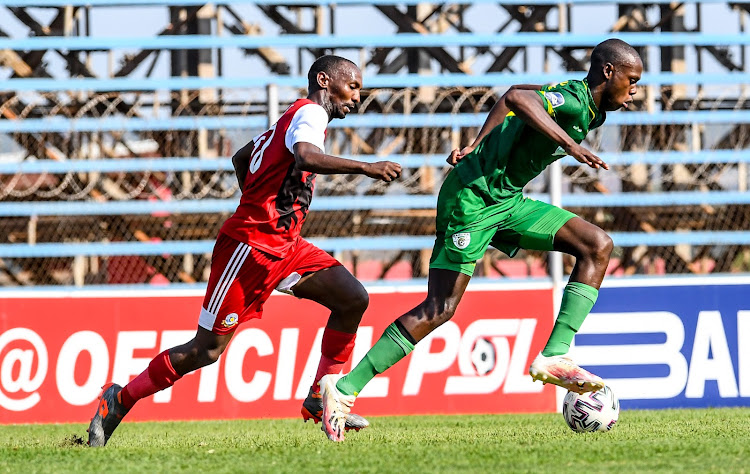 Evidence Makgopa of Baroka FC is challenged by Thabo Rakhale of Tshakhuma during the DStv Premiership match in Thohoyandou.
Image: Sydney Seshibedi/Gallo Images

Rookies Tshakhuma Tsha Madzivhandila FC (TTM) registered their first league win of the season after a last-gasp victory over provincial rivals Baroka FC in the Limpopo derby on Sunday afternoon.

Zambian striker Justin Shonga smashed and grabbed the three points for Joel Masutha’s side with a late goal at Thohoyandou Stadium in Venda to inflict a first defeat on the high-flying Baroka‚ who have had one of the brightest of starts with two wins and draw before this defeat.

Shonga finished a great team move after he found himself unmarked in the visitors' box to side-foot his first goal of the season‚ beating Oscarine Masuluke in the Baroka goal.

TTM could have wrapped up the match in the first half had it not been for a combination of questionable officiating and poor decision-making.

TTM attacking midfielder Thabo Rakhale thought he had put his team ahead with a stunning volley from the edge of the box after receiving a knock-back from Lerato Lamola from a cross.

Television replays showed that Lamola was miles on-side when he knocked the ball back for Rakhale but the near side linesman had other ideas as he raised his flag for offside.

Striker Rhulani Manzini won a penalty after he was bundled over inside the box but the burly striker got up and ballooned the spot kick over the crossbar as TTM missed another glorious chance.

TTM are now placed 10th on the Dstv Premiership table with five points from four matches‚ while Baroka find themselves in fourth spot on seven points from the same number of matches.

Baroka will be on the road again in their next match as they travel to Soweto to face Orlando Pirates at Orlando Stadium on Saturday while TTM are away against Chippa United the following day at Nelson Mandela Bay Stadium in Port Elizabeth.