Will Gavin Hunt continue to cut a frustrated figure on the Kaizer Chiefs bench this weekend? 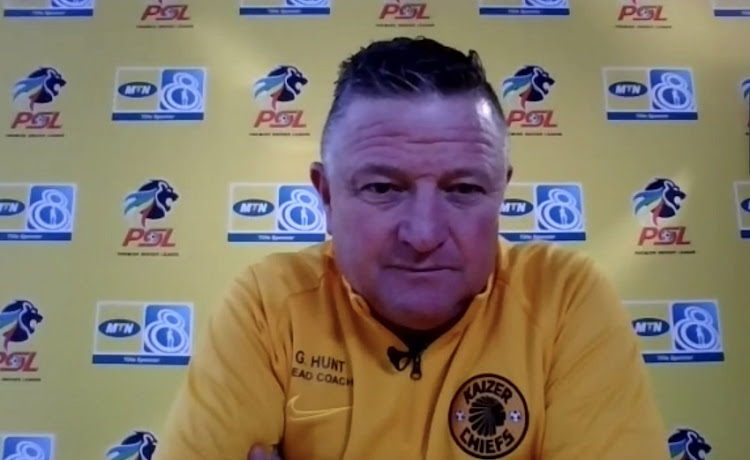 Kaizer Chiefs coach Gavin Hunt has said that the short‚ two-week 2020-21 pre-season is the main reason for some of his veterans creaking through the start of this campaign.

It is no wonder Hunt has almost scratched his scalp off on the touchlines of Chiefs’ stuttering performances‚ including their 0-0 DStv draw against rookies TS Galaxy at FNB Stadium on Wednesday night‚ and Saturday’s 3-0 MTN8 semifinal first leg defeat to Orlando Pirates.

In matches‚ Hunt’s brain looks to be ticking over at a furious rate trying to calculate not just exactly how many puzzles he has to solve to get Chiefs on track in 2020-21‚ but also how to tackle each one individually.

From the posers of strikers Khama Billiat and Leonardo Castro seemingly making an effort‚ but not scoring‚ to the injury to Samir Nurkovic‚ a transfer ban to a club with a squad that needs refreshing in key positions‚ and how to introduce raw youngsters‚ Hunt’s question marks seem numerous. Add‚ he says‚ veterans struggling with conditioning.

“We couldn’t do a proper pre-season in terms of where you go through the stages of what you want to do‚” Hunt said on Thursday in his pre-match press conference to Sunday’s second leg against Pirates at FNB Stadium.

“So it’s been a lot of trying to go with a lot of what they had last year. Obviously minus Samir‚ which is a big blow as he was pivotal to the way they played last year.

“And trying to find a way that suits the best we can with what we’ve got available.

“But condition-wise‚ we need conditioning all over. A lot of these players like ‘Tower’ [Erick Mathoho]‚ Kgotso Moleko‚ Leonardo Castro‚ we need to play them fit.”

In his post-match press conference on Wednesday night Hunt‚ asked about Willard Katsande’s creaky performances and seeming inability to finish a game‚ also alluded to the short pre-season.

Katsande was substituted off for his second time in two starts this season against Galaxy‚ with one other appearance coming off the bench. He is not the only “older” Chiefs player labouring.

“This season we’re going to need everybody. The biggest problem with those [older] players was there was no pre-season – it was two weeks. And then‚ on top of that they had the bubble‚ and then [four-month lockdown break] before that‚” Hunt said.

“Younger players will get fit quicker‚ the older players longer. And that’s maybe what’s happened from the bubble. Because once you stop when you get to a certain age it can be very difficult to get your legs going again. That's where you need the full six weeks [pre-season].”

The psychological effect of failing to win the league in the final half-hour last season‚ in Chiefs’ 50th anniversary campaign‚ missing a chance to end five years without a trophy‚ could also be added to Hunt’s list of posers. The players’ commitment has been questioned‚ too.

Stamping his identity in philosophy and gameplan when predecessor Ernst Middendorp did well with a squad with challenges‚ but left something of a firestorm too due to the fights he had with senior players‚ is another.

Hunt’s scalp might be in for some more punishment yet‚ as he seeks the answers.