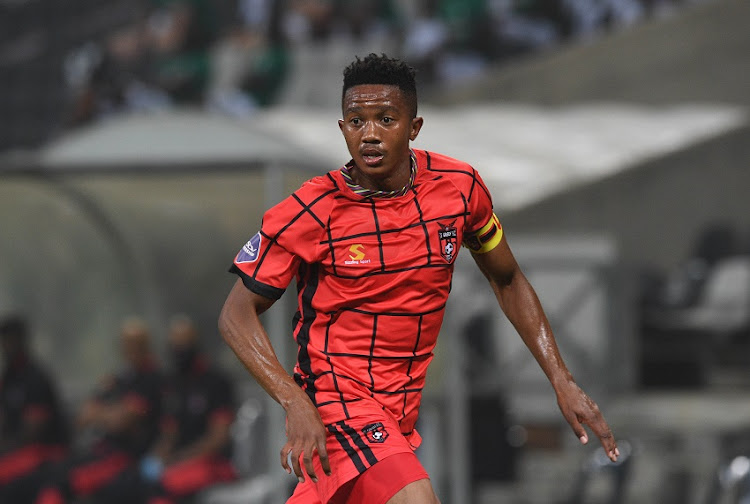 Given Msimango of TS Galaxy during the DStv Premiership match between TS Galaxy and AmaZulu at Mbombela Stadium on October 28, 2020 in Nelspruit, South Africa.
Image: Sydney Mahlangu/BackpagePix/Gallo Images

TS Galaxy will not look to the past as they seek another famous upset against Kaizer Chiefs in the teams’ first meeting since Amakhosi’s fateful and infamous Nedbank Cup final defeat of 2018-19‚ captain Given Msimango has said.

New team Galaxy‚ who bought the franchise of Highlands Park‚ have had a decent unbeaten start to life in the DStv Premiership as they line up against Chiefs at FNB Stadium on Wednesday night.

It was former Orlando Pirates captain Malesela who was the architect of the first win by a First Division team of the Nedbank Cup‚ beating Ernst Middendorp’s Chiefs 1-0 at Moses Mabhida Stadium in May 2019.

“Of course the team have experienced success against Chiefs in the Nedbank Cup final. But that’s in the past. This is football and we’re focussing on the present‚” defender Msimango said.

“There have been a lot of changes since then. And I think the changes in playing personnel‚ changes in coach [of Chiefs]‚ will make the approach to the game very different.

“Yes‚ it’s a positive for the team know that we have won against Chiefs. But it won’t matter on the day. What will matter is the effort that the guys put in.”

Msimango said he expects a dangerous Chiefs on the rebound following Amakhosi being stung 3-0 by bitter foes Orlando Pirates in Saturday’s first leg of their MTN8 semi-final at Orlando Stadium.

“Yes of course they played a cup game against Orlando Pirates this past weekend‚ and they didn’t get a good result – and that makes them a very dangerous opponent coming into Wednesday’s game‚” the defender said.

“We are very much aware of that and we’ve prepared accordingly for that match on Wednesday. Our planning will come into play and we hope to utilise the chances we create during the game.”

Chiefs‚ under new coach Gavin Hunt‚ have had mixed fortunes in 2020-21.

They beat Maritzburg United 2-1 in the MTN8 quarterfinals‚ then in the league lost 3-0 to Mamelodi Sundowns at home and beat Chippa United 1-0 away‚ before another sizeable defeat to Pirates in the MTN semis.