AmaZulu and Orlando Pirates share the spoils in Durban 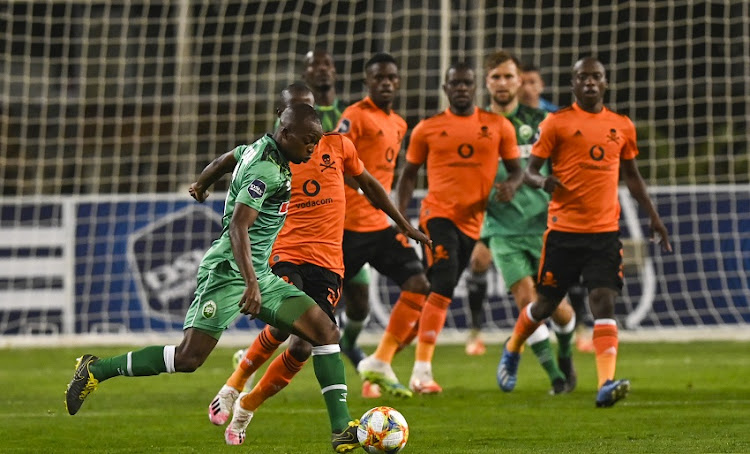 Butholezwe Ncube of AmaZulu FC lines up a shot at goal during the DStv Premiership match between AmaZulu and Orlando Pirates at Jonsson Kings Park on October 14, 2020 in Durban, South Africa.
Image: Gerhard DuraanBackpagepix/Gallo Images

AmaZulu will be right to feel aggrieved that they only got to share the spoils 1-1 with Orlando Pirates from a the dubious penalty awarded to the visitors in their opening DStv Premiership encounter at Kings Park in Durban on Saturday night.

In what was a scrappy affair that could have gone either way. Pirates were awarded a questionable penalty in the 18th minute after Bucs midfielder Siphesihle Ndlovu was clearly tackled outside the box by Sibusiso Mabiliso‚ but match referee Abongile Tom pointed to the spot.

Last season PSL joint top-scorer Gabadinho Mhango stepped up to slot the opening goal for Bucs but the lead didn’t last much longer as Usuthu were deservedly awarded a spot-kick of their own in the 33rd minute.

This time AmaZulu’s new signing and former Bucs midfielder Luvuyo Memela was rough-handled by Fortune Makaringe inside the area and Tom‚ maybe feeling guilty for his earlier error‚ pointed to the spot again for Lehlohonolo Majoro to score the equaliser for the Durban outfit.

It showed from the exchanges that both sides still needed to do a lot to polishing their combinations‚ with so many wayward passes as to make the match an almost unwatchable.

It was AmaZulu who looked the brighter side in the second half with Majoro denied a second goal by Bucs goalkeeper Wayne Sandilands before the hour mark.

It was expected that Pirates would continue their dominance over Usuthu as they had won four league matches out of 10 in the last seven years in this fixture. Usuthu’s last win against Pirates was a 1-0 victory courtesy of Bongani Ndulula’s strike away in 2013 in those 10 encounters.

With a new owner in businessman Sandile Zungu‚ who has said he wants to see this team finishing in the top four‚ Usuthu looked organised‚ determined and committed throughout the match.

But when it came to the football dished out‚ both sides failed to live up to the expectations as there were few clearcut chances created at both ends.

Pirates will hope for a better outcome when they host Stellenbosch FC at Orlando Stadium on Wednesday while Usuthu will be away to TS Galaxy at Mbombela Stadium in Mpumalanga on the same day.

Other late PSL results on Saturday: