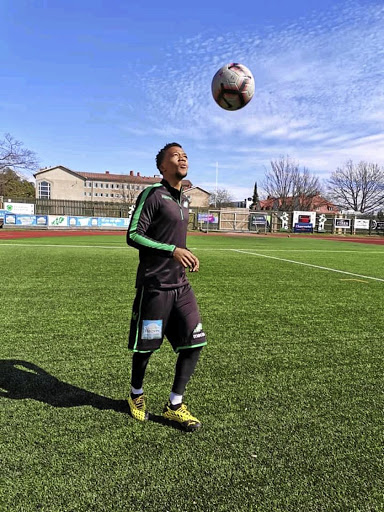 From being dubbed a "bad boy" in the Absa Premiership, erstwhile Amajita skipper Ayabulela Konqobe has developed to be a dependable and matured utility player in Finland.

Konqobe is arguably in his best form yet, plying his trade for Finnish second-tier club Ekenas IF.

The rejuvenated Konqobe, who's been converted from an astute centre-back into an efficient attacking-midfielder, is banging goals for fun overseas, having already netted five times in five league games, with one assist as well for Ekenas.

During his stints at Ajax Cape Town, AmaZulu and SuperSport United, the now 24-year-old former SA under-20 captain was tipped for greatness, but allegations of ill-discipline thrust him into the limelight more than his undeniable gift.

Now a father of a five-month-old son, Konqobe, who was once touted as the next Lucas Radebe or Mbulelo Mabizela, insists he's matured and with the blistering form he's in in Europe, you can't doubt his claims.

"I have just grown up. I have realised that I don't care what people say about me. At the end of the day I had to improve my football and the person that I am," Konqobe told Sowetan from the tiny town of Ekenas in Finland.

"Now it's not even about me. I am a father now. I have to be a good father to my son, to be a good example. Those things [wrong deeds] are all in the past."

The lad from Gugulethu, Cape Town, is happy with his new position. Konqobe has no intention of returning to his natural centre-back position unless a coach convinces him to in the future.

"Well... to be honest, I don't have plans of going back and play centre-back anymore. But at the end of the day, I am a footballer, so I can play wherever the coach needs me to play."

Konqobe's club is second on the table on 11 points.

Highlands Park chairman Brad Kaftel has denied that they have sold the club.
Sport
1 year ago

Highlands Park have received a big offer for the sale of their Premier Soccer League (PSL) franchise that will have to be considered if it can be ...
Sport
1 year ago
Next Article