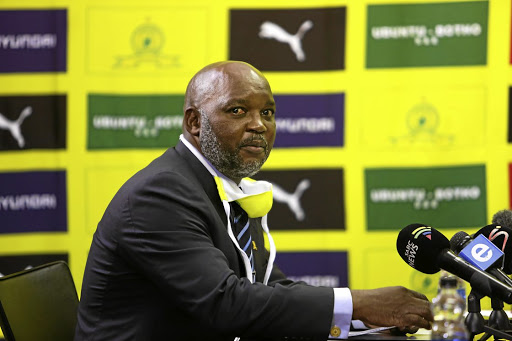 Sundowns coach Pitso Mosimane has extended his contract until the end of the 2023/2024 season.
Image: Alon Skuy

The Premier Soccer League (PSL) players will need a minimum of three weeks of training before they resume playing‚ Mamelodi Sundowns coach Pitso Mosimane has said as clubs prepare to report back for training in the coming days.

Football around the world rolled back into action last week with the return of Germany’s Bundesliga‚ Spain’s La Liga and Italy’s Serie A.

The English Premier League roars back into live action on June 17 and the South African PSL is also expected to claim its spotlight back with a return to training protocols.

The PSL’s executive committee will meet on Monday to take a decision on when the clubs can return to training.

“I watched all La Liga games (on Sunday) and majority of players were struggling after the 60th minute‚ including Barca and Real Madrid‚” tweeted the coach who was born in the West Rand township of Kagiso 55 years ago.

The former Bafana Bafana coach also said he is in favour of the use of five substitutes during what would be a frenetic spell of 108 league fixtures crammed into the next six weeks.

“Three weeks minimum to train before we start playing and five substitutes to be allowed in a game‚” said Mosimane‚ who extended his trophy-laden eight-and-a-half years with Sundowns by another four years until the end of the 2023/2024 season.

The PSL clubs are awaiting government approval for the return to training in small groups following sports minister Nathi Mthethwa’s gazetting of sports regulations for lockdown level three‚ which will pave the way for a return to the training grounds.

The Caf Champions League-winning coach will aim to topple long-time leaders Kaizer Chiefs at the top of the Absa Premiership table when play does resume behind closed doors.

Chiefs have 48 points from 22 matches and lead second-placed champions Sundowns‚ who have played a game less‚ by four points.