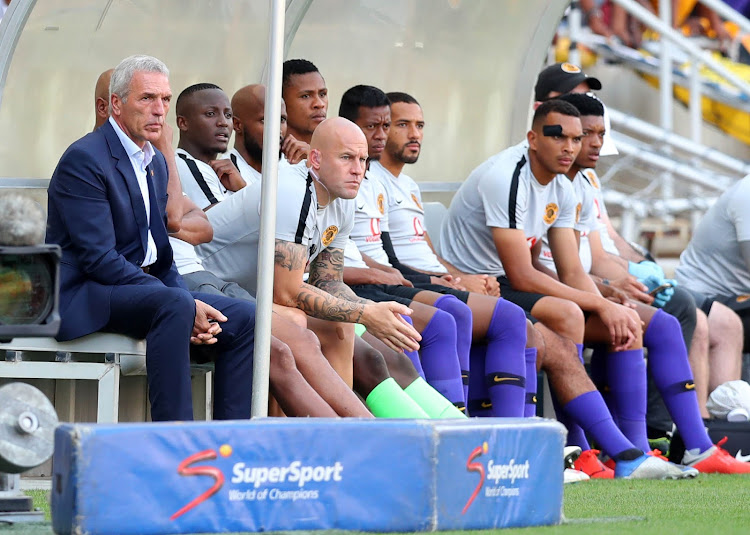 The time for attractive football‚ and not getting results‚ is over at Kaizer Chiefs‚ Amakhosi coach Ernst Middendorp said as his team stumbled somewhat to a 1-0 Absa Premiership victory against Maritzburg United at FNB Stadium on Saturday.

Middendorp in part was explaining why an experiment of playing Philani Zulu in central midfield was terminated in just the 26th minute‚ as Chiefs' famous battler Willard Katsande came on.

Chiefs were flat in the first half‚ and let off to some extent by the lack of confidence of desperate‚ last-placed United to go for the jugular.

And Middendorp said - as Chiefs cling to an outside hope of challenging‚ or at least a top three finish - he would certainly accept such an outcome above some previous good performances for Chiefs where they had not managed to get the result.

"I am honest - we had fantastic games against all these teams. What was the outcome? And so we have said‚ OK - let's do it a bit differently.

"And in this game‚ perhaps we could have played out of it [a poor start]. But no. After 18 minutes it was clear to me.

"We needed a winning-all [approach]‚ we needed a bulldozer [Katsande]‚ and a winning mentality in front of the area with the long ball.

"And it was about the result. It was to stop a certain easy-going through the centre‚ no tracking‚ no winning the ball mentality.

"I think you have seen all our games.

"And how often I was sitting in this position [indicating United coach Eric Tinkler sitting beside him]‚ and talking about‚ 'Oh man‚ we played 1-1 [against Polokwane]'‚ or‚ 'Oh man‚ we lost against Sundowns. How is that possible with this performance?'

"In a certain moment we really sat down and said‚ 'OK‚ we'll take this player out. And if somebody has a winning mentality‚ and we need a defensive approach in the centre of midfield‚ we'll do it'.

"And even next week against SuperSport‚ we need a result. I want the result.

"That's what counts now. We have thrown away too many points. With six or seven points lost through errors‚ through not picking up the chances‚ we could have been in the leading position.

"So‚ sorry for not having the kind of performance where we can say‚ 'Wow‚ that was speed‚ that was tempo‚ that was excellent'. At the moment it's about results‚ and nothing else."

Chiefs moved from seventh to sixth place‚ and are now just five points behind leaders Orlando Pirates in a crammed top six race for the title.

No attacking players in wall during free-kick.
Sport
2 years ago
Next Article