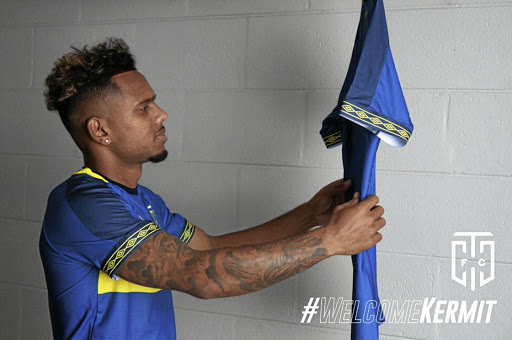 Cape Town City's signing of Kermit Erasmus could spell the end for another striker at the club, Tokelo Rantie.

Rantie, 28, is yet to make his debut since joining the Citizens in September.

Sowetan understands that Rantie has been dealing with off-the-field issues that have prevented him from focusing on the job at hand.

"It has nothing to do with football, it's personal - something to do with his wife - and he could be let go, that's why the club has brought in Kermit," said our source.

Rantie penned a three-year deal when the Western Cape club rescued his career.

He had been inactive for almost a year after leaving Genclerbirligi of Turkey, for whom he scored six goals in 30 appearances.

"It's sad because Cape Town City really tried to give him a chance to revive his career, but things are just not working out," added the source.

Club boss John Comitis wasn't particularly keen to engage us on the latest developments at the club.

"We have a press conference [today]. We are trying to do things right and we will engage all of you [the media] there," Comitis told Sowetan yesterday.

But our source insisted that Rantie's days at the club are numbered.

Erasmus, meanwhile, will only be available for selection from January since the 28-year-old former Bafana Bafana striker was not a free agent when he signed for the club on a three-and-a-half-year deal.

City is Erasmus's third club this season, which will bring back memories of the Tendai Ndoro saga involving Ajax Cape Town, who were docked points and relegated after he played for them despite playing for two other clubs last season.

Erasmus has been with Swedish side AFC Eskilstuna and Portugal's Vitoria de Setubal this season, before arriving in Cape Town. But since the Swedish season runs from March to November, it's understood that Erasmus is eligible to play.

The PSL and Primeira Liga run from August to May, while the Swedish season overlaps them, because it's from March to November.