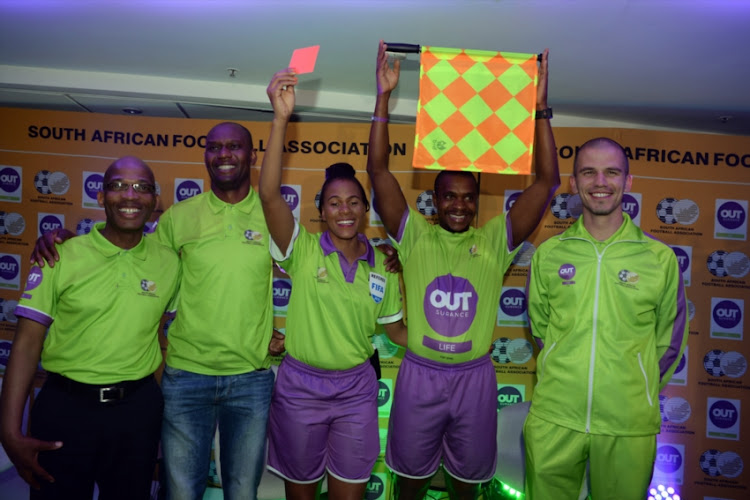 Premier Soccer League (PSL) referees are set to wear the new OUTsurance branded kits on Saturday‚ as the PSL’s headline sponsors moved to distance themselves from any insinuation they had in any way threatened the weekend’s matches going ahead.

The South African Football Association (Safa) sent correspondence on Saturday to their referees and other concerned parties that their strongly-worded statement made on Friday – that the FA is the ruling body‚ and in charge of match officials‚ and the OUTsurance branded apparel must be worn – stands.

At issue is a new sponsorship of referees announced on Monday by governing body Safa‚ who oversee match officials even for the professional wing‚ the PSL.

The South African Football Association (Safa) has announced a R50-million five-year sponsorship deal with insurance company OUTsurance that will look ...
Sport
3 years ago

The sponsors of the Absa Premiership sent out statement on Saturday distancing themselves from an insinuation that Absa ever made any insistence on the weekend’s matches not going ahead.

“Absa has noted reports pertaining to a new sponsorship agreement between OUTsurance and the South African Football Association‚ which in part requires that referees wear OUTsurance-branded jerseys during matches‚” Absa stated in their release.

“These media reports have implied that as a sponsor of the Absa Premiership‚ Absa has threatened match officials on the issue. This is not true. We would therefore like to place the following on record.

“We do not interfere in the administration of football or any other sporting code we sponsor.

“To the extent that any sporting code or body we support through sponsorship has a disagreement with any other party‚ it is their responsibility to resolve such disagreement.

“As a sponsor of the Absa Premiership‚ we can only protect our rights in terms of the legal agreements we have in place.

The release concluded: “We believe that a good working relationship between the PSL and Safa is in the best interest of football in the country. Accordingly‚ we urge the PSL and Safa to resolve the matter in a manner that works for all parties concerned.”

Safa sent out a strongly-worded press release on Friday‚ reminding the PSL in no uncertain teams that‚ in terms of Fifa statutes‚ the league is the subordinate in the relationship.

This was in response to a letter circulated by the PSL to their clubs on Wednesday questioning Safa’s lack of communication regarding the refereeing sponsorship.

Safa’s lack of communication over the deal – and the consequent branding on the match officials that would be worn in league matches – appears to have created much of the chaos in the disagreement.

SowetanLIVE has learned that OUTsurance approached the PSL and the league’s broadcasters‚ SuperSport International‚ last year about sponsoring a TV programme on referees.

Absa is apparently of the view that as the headline sponsors the company promotes the PSL‚ and that OUTsurance sponsoring referees leverages that promotion to some extent.

Absa would be willing to waive such rights in special circumstances. However the company had the OUTsurance sponsorship of referees sprung on it as a surprise when Safa made the announcement on Monday.

These are the issues Absa apparently raised with the PSL this week.