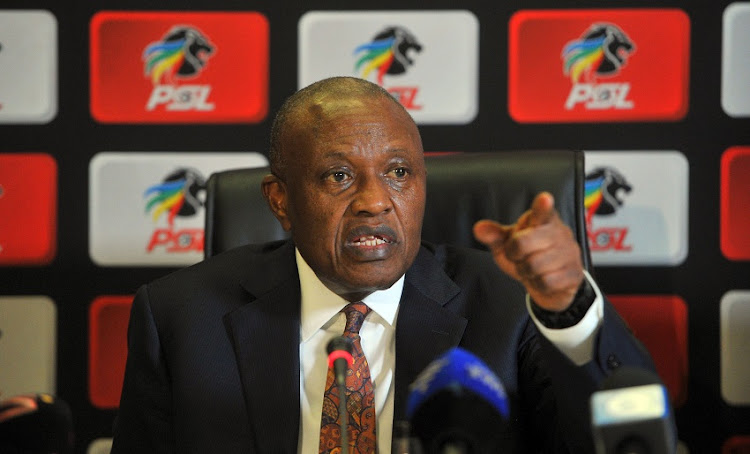 PSL Chairman Dr Irvin Khoza during the PSL Board of Governors on 12 July 2018 at Sandton Convention Centre.
Image: Sydney Mahlangu/BackpagePix

AmaZulu general manager Lunga Sokhela has defended his statement that Irvin Khoza is the only person in South Africa capable of leading the Premier Soccer League (PSL).

Sokhela also explained his reasoning for tweeting on Monday‚ in response to a newspaper report that six clubs were plotting to overthrow Khoza‚ that AmaZulu fully supported the PSL chairman.

"We @AmaZuluFootball would never support that. Dr Khoza is the only individual in SA that can lead the PSL and has our full support.”

Sokhela said he had made some outspoken comments criticising the PSL recently.

These were over the arbitration over the eligibility of Tendai Ndoro that had seen points deducted from Ajax Cape Town‚ resulting in their relegation‚ but also the awarding of points to clubs‚ meaning AmaZulu dropped out of the top eight.

“The reason for my tweet was that we know that once you mention six clubs and you don’t say which clubs there is space for people to fill it with their own information‚” Sokhela said.

“But obviously‚ with the climate as it is now‚ people must not for one second assume that it’s one of the two – AmaZulu and Ajax – who would be obvious‚ because of this whole relegation and top eight saga.

“We wanted to clarify it up-front because we didn’t want people to start filling in that vacuum with any information‚ that we were not involved in any plot or any thinking to topple Dr Khoza.

“Yes there will always be differences in terms of the opinion when it comes to certain things. It happens in any organisation‚ and that’s all that it is.

“I wanted to clarify that because I’ve also obviously been in the same newspaper being critical of the whole process.

"So I don’t want people to think that uLunga is part of some unknown plot to disturb or to topple people.”

The part of Sokhela’s tweet that had drawn a torrent of criticism‚ though‚ was his statement that only one person‚ Khoza‚ was capable of leading the PSL.

Asked if perhaps the context of his statement had been taken wrong‚ Sokhela said: “I mean‚ people can take it the way they want to.

"The reality is that where we are‚ if you look at the information that sits inside his [Khoza’s] head‚ you’d realise that he’s very important to the league right now.

“In terms of not just the sponsorships and all those things‚ and what he’s managed to do‚ even through tough economic times.

"The way that he’s managed a lot of the issues that have come up over the years to put the league where it is.

“There is nobody right now in football that has that ability‚ and the respect amongst all clubs to lead the organisation. That’s true.”

The Ajax arbitration decision was subsequently overturned in the Johannesburg High Court‚ a decision that is being appealed by the PSL in an ongoing legal saga.