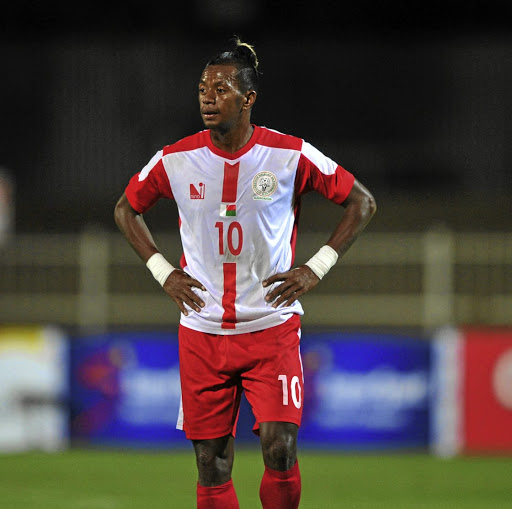 Andriamirado Hasina has been linked to Kaizer Chiefs after starring for Madagascar during the 2018 Cosafa Cup tournament held in Polokwane, South Africa, in June.
Image: Sydney Mahlangu/BackpagePix

The protracted transfer saga involving Madagascar international Andriamirado Andrianarimanana‚ more simply known as Dax‚ appears to be coming to an end as the player prepares new paperwork to complete his Kaizer Chiefs move.

Insiders have told SowetanLIVE that the transfer has turned nasty‚ with Dax’s Madagascan side Fosa Juniors withholding the players’ passport‚ while threats have been made against him.

Chiefs have made Fosa Juniors a compensation offer that has so far been turned down‚ with the islanders claiming that Dax has a contract with them until 2020.

The player disputes this though and says he should be able to leave for free as an amateur‚ but has not been able to travel to date while his documentation is in the hands of the club.

Mamelodi Sundowns need to sign three more players‚ Brazilians coach Pitso Mosimane said‚ even though he had just witnessed a display of his side's ...
Sport
3 years ago

However‚ he is hoping to have a new passport and his visa by the end of the week after gaining government assistance‚ which would allow him to travel to Johannesburg and start training with Chiefs.

It would then be up to Fosa Juniors to prove they have a valid contract with the player‚ which they would be able to take to FIFA’s Player Status Committee.

But Dax maintains he has never signed anything‚ despite the claims of his Malagasy club‚ and feels the team would not be able to prove this.

Chiefs spotted Dax playing at the 2018 COSAFA Cup in Polokwane‚ where he won Player of the Tournament.

He signed a pre-contract with them at the regional showpiece competition‚ but his club later said this was in violation of a deal they currently have with him.

Dax also claims the Madagascan league is an amateur competition and therefore his move should be treated as such – but Fosa Juniors maintain they do pay their players a salary.

Five goals and seven assists for an attacking midfielder is nothing to brag about.
Sport
3 years ago
Next Article