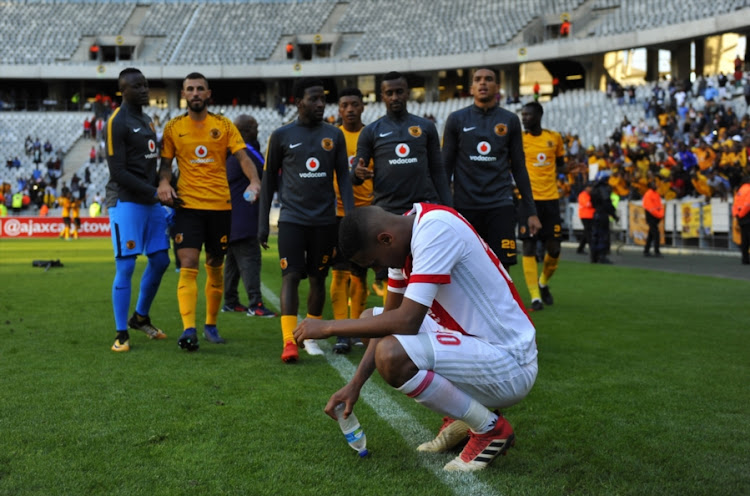 Kaizer Chiefs made sure of third place in the Absa Premiership, and a spot in next season’s African Confederation Cup, and at the same time condemned Ajax Cape Town to the end of season promotion-relegation play-offs with a 2-1 away win on Saturday afternoon.

Joseph Molongoane’s late goal settled a thrilling end-to-end encounter where Ajax threw everything forward in search of the win they needed to stay outside of the bottom top.

Chiefs were just a class above a game Ajax team, who must now lift themselves for a long trip to Thohoyandou on Wednesday at the start of the playoffs.

Ajax looked a little tentative with the weight of the burden of their task sitting heavily on their shoulders. There was indecision in their passes and a failure to push their defensive line higher, causing coach Muhsin Ertugral a multitude of mini- heart attacks on the side of the pitch.

Yet they still had the better of the first half chances with defender Roscoe Pietersen coming closest in the 21st minute when Chiefs failed to clear a corner and his clever back heel hit the upright before bouncing out.

Erratic striker Yannick Zakri, on whom much of the home hopes rested, forced a sharp save out of Brilliant Khuzwayo, deputising for Itumeleng Khune, some 14 minutes later, as his left footed shot looked goal-bound before Khuzwayo stuck out a hand and deflected it for a corner.

Khuzwayo was playing his first league game since last August in place of skipper Khune, admitted to hospital on the eve of the game with abdominal pains.

Chiefs had more than their fair share of possession but only tested Jody February, on his 22nd birthday, when Bernard Parker’s snap effort produced an acrobatic stop.

A double change at the break saw Ajax pick up the tempo but it was Chiefs who broke the deadlock for a corner as Bernard Parker scored easily in the 51st minute.

There were key saves at either end before Ajax then equalised through skipper Musa Lebnusa, again from a corner.

Ajax then threw centre back Mario Booyen and Lebusa forward with a five man attack, leaving themselves exposed at the back and the game became a thrilling affair as the chances went from one end to the other.

Eventually Ajax ran out of legs and were caught on the counter as Molongoane sent them to the play-offs with a close-in finish.