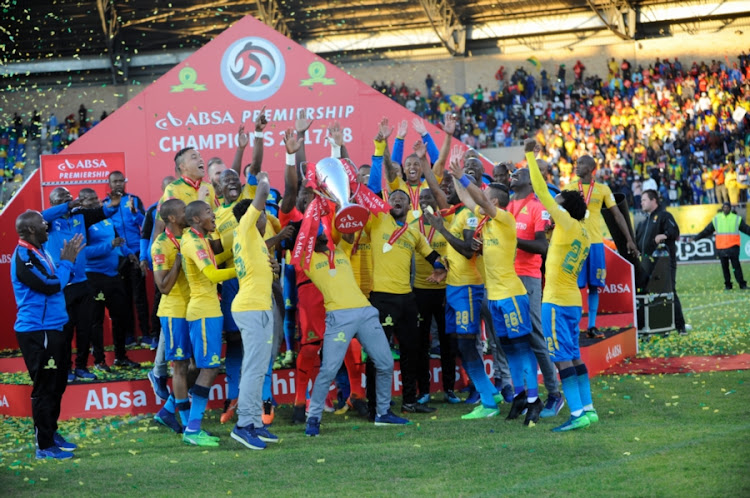 Mamelodi Sundowns coaching and playing stuff lift the Absa Premiership 2018/19 trophy after a goalless draw away at Bloemfontein Celtic on Saturday May 12 2018.
Image: Charlz Lombard/Gallo Images

Orlando Pirates finished 2017-18 with a victory, 2-1 against Free State Stars at Orlando Stadium on Saturday, and the Absa Premiership runners-up will look to next season with spring of expectancy in their step.

Ntsikelelo Nyauza headed Pirates ahead in the 22nd minute, but Bucs lost their rhythm and allowed Nhlanhla Vilakazi a 51st-minute equaliser.

Thamsanqa Gabuza, making just his sixth league appearance of 2018, all as a substitute, buried an 85th-minute winner, the big man's first goal since September.

While the already-confirmed runners-up managed a win, the new champions, Mamelodi Sundowns, at DR Molemela Stadium simply to collect the trophy, were held to a 0-0 draw against Bloemfontein Celtic.

At Orlando, Pirates started brightly, took a lead, then faded as a mixed-strength side never quite found the rhythm nor energy to dominate a Stars side trying to improve on the sixth place they came into the game on.

But Gabuza's late strike gave Bucs the win they deserved at the end of an impressive 2018, and the few thousand fans who came to watch their ultimately meaningless, in terms of the result, final game with a smile on their faces.

Pirates have had a hugely promising 2017-18 season, even if it could not be crowned by a trophy or even a cup final.

Eleventh place last season to second this campaign was a good turnaround by coach Milutin Sredojevic and his assistant Rhulani Mokwena. Most impressive was the football played by a combination not changed much - though certainly cleverly tweaked by arrivals such as Justin Shonga, Augustine Mulenga and Xola Mlambo - from the one that conceded six goals twice last season.

They pushed Sundowns until the second-last game in a season where no-one else was going to, thankfully ensuring the PSL was not a one-horse race. Pirates ended on 52 points, Downs on 60.

Most importantly Pirates returned to Caf Champions League (ACL) football. The combination of the 2013 ACL and 2015 Confederation Cup finalists with 2016 ACL champions Sundowns in a two-pronged attack on the continent next season is a tasty one.

And next season, too, based on the well-organised in defence, dynamic in attack football they displayed in 2017-18, Bucs really should win domestic trophies.

For Stars, sixth place after threatening the top three not long ago might cast doubts on whether Luc Eymael really is Kaizer Chiefs coach material, as has been suggested.

But Ea Lla Koto still have Saturday's Nedbank Cup final against Maritzburg United at Caope Town Stadium to play for what would be Stars' first trophy since 1994.

Pirates pressed hard for an early opener, forcing Stars to make well-timed standing challenges to keep them at bay.

Bucs' pressure was converted when Justin Shonga's corner was whipped in with pace and accuracy and found centreback Nyauza to get above his marker and head into the top-right corner past Thela Ngobeni.

Bucs relaxed on their lead, and allowed Stars to play more.

They should not have taken their foot off the gas. Bucs conceded a soft equaliser soon after the break when Paulus Masehe's flick-on of Harris Tchilimbou's free-kick found Vilakazi free with all the time and space he needed to sweep past Wayne Sandilands.

Stars maintained the momentum without the penetration to breach Bucs again, though Vilakazi did miss an open goal from three meters.

Then Bucs snuck in for the winner, a quick free-kick seeing Shonga produce a low and hard drive that Badra Sangare - on for Ngobeni moments earlier - spilled, Gabuza burying on the follow-up.

Mamelodi Sundowns coach Pitso Mosimane‚ who on Wednesday snared the Premier Soccer League coach of the month for April‚ says the criteria used to ...
Sport
3 years ago

Orlando Pirates finished 2017-18 with a victory, 2-1 against Free State Stars at Orlando Stadium on Saturday, and the Absa Premiership runners-up ...
Sport
3 years ago
Next Article