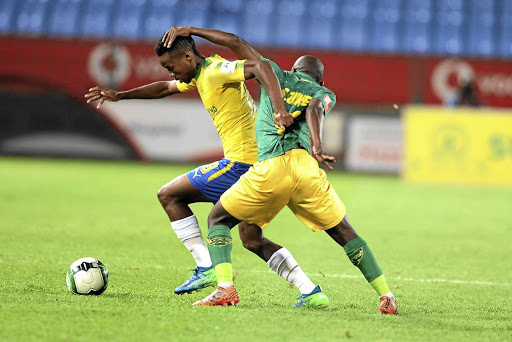 Mamelodi Sundowns have turned back the clock to their "against all odds" form to be on the cusp of securing the Premiership title.

They have proven once again that they are most lethal when backed into a corner.

They are now three points away from being crowned champions for the record eighth time.

The Brazilians could clinch it as early as next Wednesday if they win at Maritzburg United and Orlando Pirates fail to beat Bidvest Wits on the same day.

Sundowns enjoy a six-point lead at the summit of the table with three games remaining.

The Brazilians have just made easy work of a taxing schedule after winning five consecutive games in the space of 16 days.

That streak of wins has placed them in pole position for the league and Nedbank Cup double.

They were in a similar ruthless mode when they captured the CAF Champions League two years ago.

Coach Pitso Mosimane knows that his team is not easy to stop when they hit the automatic switch.

"At this point in time the guys don't care about the heavy programme, they want to win the league so we don't have to motivate them," Mosimane said.

"We don't train - we make them rest. We have been in this space before, we know this programme and we will not make excuses."

Sundowns have a crucial double-header against Maritzburg in the Nedbank Cup semifinal on Sunday (3pm) and in the league next week.

Mosimane said the Team of Choice have been the most impressive this season and they will need to be at their best to triumph over them twice.

"They play with two strikers outright. Everybody has their own software of playing. It's very difficult."