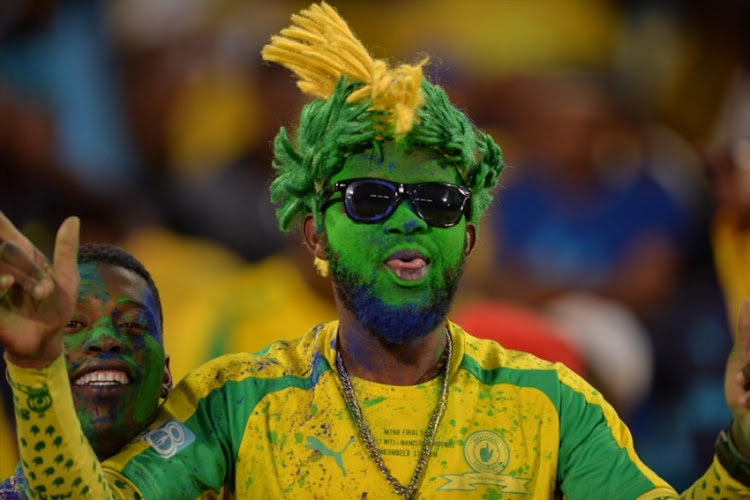 Bloemfontein Celtic have Botha. Kaizer Chiefs have Colly. And Orlando Pirates have Mgijimi.

Now Mamelodi Sundowns have their own, as social media sensation and club fan David "Mdeva" Mashigo is fast becoming one of the most recognisable fans in SA.

Mdeva, who was born and lives in Mamelodi, has been a die-hard Sundowns fan all his life - ever since his late father took him to the stadium as a young man. "I fell in love with the club during the days of Daniel Mudau and Roger Feutmba when they were winning everything there was to win," he told Sowetan.

Mdeva shot to cyberspace fame when a picture of him looking despondent after their 3-1 loss to Pirates in January became a meme. The 35-year-old admits that the Brazilians just had a bad day at the office.

"It was late in the game and I just accepted that we were losing. A few days later, I would get calls from friends to tell me that I was trending."

He began painting his face by chance ahead of the CAF Champions League final first-leg in 2016. "Some guys were painting themselves and I asked if they could do the same to my whole body. Ever since that game in Atteridgeville, I never looked back," he said.

Outside of his life as a Sundowns fanatic, he makes a living transporting pupils and working at a family-owned tavern in Mamelodi.

The father of three boys is the deputy chairman of the Mamelodi Far East branch.

With Sundowns supporters notoriously hard to please, Mdeva concedes that at first some people were harsh on coach Pitso Mosimane. "I think people did not understand the kind of person Pitso was but now we all love him."