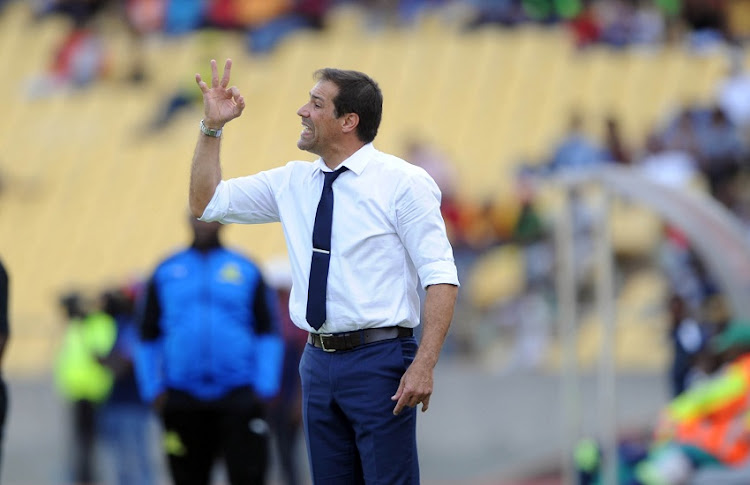 Sitting with just 15 points at the bottom of the Absa Premiership table‚ Platinum Stars coach Roger de Sa believes that gaining the same number of points in their remaining 12 games will save them from relegation.

Stars were handed a 3-0 drubbing away to log leaders Mamelodi Sundowns at the weekend.

The former Bidvest Wits and Ajax Cape Town coach conceded that they never expected much from their clash against the star-studded Sundowns but the journey for survival is still on for the North West club.

“It went as expected‚” said De Sa of their poor result against Sundowns.

He was quick‚ though‚ to point out that they haven’t given up hope of surviving relegation even though they lack the big purse to strengthen the team.

“It’s always been a scrap from the day I arrived here really.

"When I arrived we had three games‚ no points and we were bottom of the log.

"So we knew it was always going to be a scrap.

“We targeted 15 points at the halfway mark which we managed to achieve. We are trying to target another 15 in the second round because that’s what it is.

“There’s no other way because we don’t have a big budget to buy a Brockie for a couple of millions.

Ahead of another tough encounter against title-chasing Orlando Pirates at the Royal Bafokeng Stadium on Saturday‚ De Sa revealed he was hoping to sign a player or two to fill the gaps in his team.

“There are two others that we are trying to convince to come over.

"It’s not that easy to get the players but we are trying.

“That should make a difference because right now we do need reinforcements in our team.

"There’s no doubt about it.”