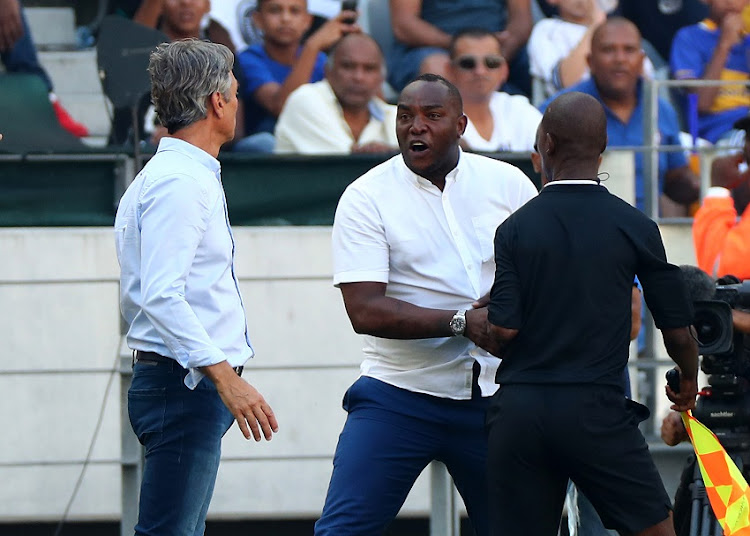 Muhsin Ertugral says Benni McCarthy needs to learn to control his behaviour in the dug-out after the Cape Town City coach was sent to the stands following a confrontation in the Ikapa Derby on Saturday.

Ertugral admitted that City were the better side in a 1-0 win secured via a Craig Martin goal in the second half‚ a result that left 10-man Ajax Cape Town in the relegation zone.

But there was a flashpoint on the sidelines though with 10 minutes remaining when the fourth official allowed Kwanda Mngonyama to wander onto the pitch without the man he was due to replace‚ Martin‚ having come off.

It meant that City briefly had 12 players on the pitch‚ before Ertugral protested the error and demanded a yellow card for Mngonyama‚ despite the player having been given permission to enter the pitch by fourth official Abongile Tom.

An incensed McCarthy left his dug-out and marched over to angrily confront Ertugral‚ before having to be restrained.

It led to a red card from referee Thando Ndzandzeka‚ and Ertugral feels it was justified.

“He needs to learn‚ he is still a baby … next time I will bring lollipops so he can play with it‚” Ertugral said.

“Benni needs also to learn a little bit … he was a great player but he also needs to learn how to behave a bit on the side [in the dugout].

"There is a line‚ why did they draw a line there?

"He came out of his line‚ came to my line and asked what am I doing.

“I don’t know what he is doing.

"I am long in this business and we put him out in the stands very quickly.

“Later on he wanted to explain to me certain things‚ but after the game for me these things are always over.

"He will take time to learn‚ but he will.”

Ertugral says he was left unimpressed by McCarthy’s explanation.

“When I came out he was waiting for me outside.

"I have a great respect for him‚ he is a young boy that has achieved.

"How many players in South Africa have achieved what he has?

“There are two things in the football world that players want to achieve I think‚ win the World Cup and win the Champions League. He has achieved that.

“After the game and I came out of the tunnel‚ he wanted to talk to me and I went to him and listened to him.

"He didn’t want to listen to what I had to say though.

“But they had a couple more players on the field than us.

"This is football here‚ this is not an old age home‚ we are playing a derby and I have a right to say that.

“Is he allowed [to speak]‚ because he played Champions League‚ and I am not allowed to speak? Does he have more rights than me‚ what is it?

“Then he gets out of his line and wants to explain something‚ so I say get back to your line there.

"You need to be in there.

"When you get out because you want to explain something‚ then I will complain that you are out there.