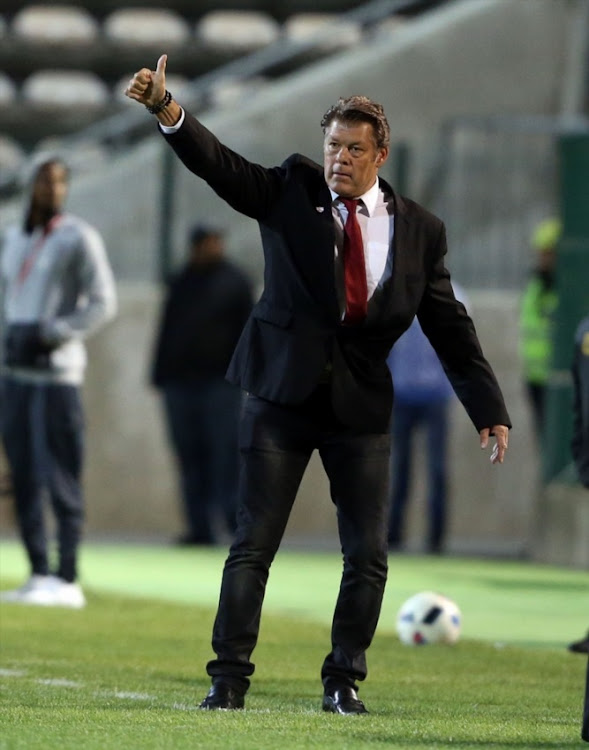 Free State Stars coach Luc Eymael has reiterated that his club will not stand in the way of players who want to leave amid reports this month that strikers Edward Manqele and Mohammed Anas are the target of fellow Premier Soccer League sides.

Eymael has done superbly to guide Stars to second in the Premier League standings‚ claiming four victories in a row‚ including a 1-0 success over Cape Town City at the weekend that was achieved without the pair of forwards.

Anas was an unused substitute and Manqele missed the fixture through injury.

The Belgian coach would like the duo to stay‚ but says he has already discussed with club management the fact that the players should be allowed to leave if the deal is right for Stars.

“I will never force a player to remain at my club who is not 200 percent committed to the team‚” Eymael tells SowetanLIVE.

“I have discussed with the chairman [Mike Mokoena] and we said yes‚ if the players can earn more money elsewhere and if we can make a good deal‚ then we should let them go.”

Eymael has said previously that the duo have been contacted directly by Chippa United and BidVest Wits respectively‚ but insists there has been no formal offer for either player.

“They have been contacted by other teams‚ this is a fact‚ but we have not received official contact and until then‚ there is no decision to make on whether they stay or go.”

Eymael is seemingly preparing for the exit of at least one of them after the arrival of a new striker over the weekend‚ former Glasgow Celtic forward Amido Balde‚ according to TimesLIVE sources.

The coach would not reveal the identity of the player‚ but said he arrived in South Africa on Friday night and would undergo a medical ahead of his impending move.

Balde is a journeyman forward‚ who has also played in Portugal‚ Israel‚ Belgium and France.

Stars have already signed Congo-Brazzaville forward Harris Tchilimbou this month‚ who netted the winner against City on Saturday.