How Teko Modise was relentlessly pursued by a stalker 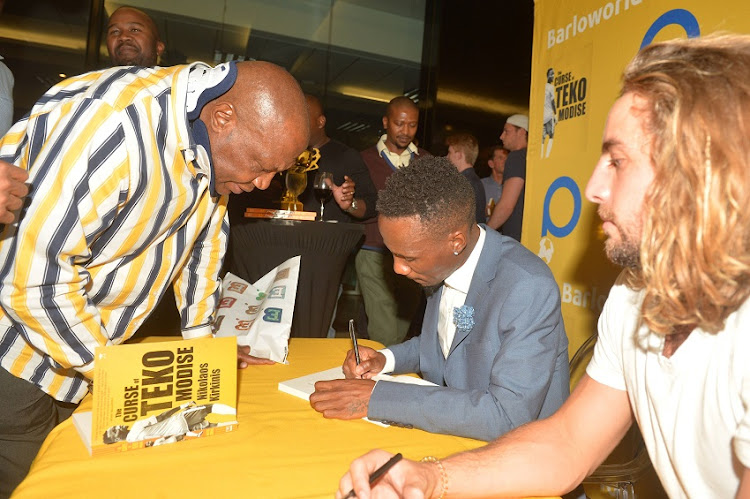 Nikolaos Kirkinis and Teko Modise sign a book to Shakes Mashaba during the Launch of the book, The Curse of Teko Modise at Exclusive Books, Mall of Rosebank on November 29, 2017 in Johannesburg.
Image: Lefty Shivambu/Gallo Images

The new book on Teko Modise alleges he was stalked by a cult-like secret society then gave R50 000 to a “Congo king” sangoma at his lowest ebb when he was at Orlando Pirates and dreams of a move overseas were not materialising.

In two chapters dedicated to a more bizarre period in Modise’s life it is asserted that after a ritual by the “Congo king” in which ornaments began speaking‚ the former Bafana Bafana midfield general was given a live rabbit.

The R50 000 he paid to the witch doctor was then burned before his eyes.

The book describes a dark period soon after the 2010 World Cup where Modise fell out with his Pirates teammates and was missing training sessions as he turned to drink.

At that time he was contacted by a woman named “Melissa” who knew intimate details about his daily life.

“Some days‚ she would call Teko to tell him not to take a particular route when driving to training.

“She would never call Teko when he was in his house.

"However‚ every time he drove out his gate‚ he would receive a call from the same private number.”

One day Modise was warned not to go to a party of friend and then Kaizer Chiefs right-back Siboniso Gaxa.

“'If you do‚ your car will give you problems when you wake up in the morning’”.

Modise went and the next morning his new BMW M3 had been “vandalised beyond recognition. … Someone had taken a sharp object and scratched the paint off.

"They had engraved all sorts of insults‚ swear words and phallic symbols”.

Melissa told Modise about an “organisation” who wanted him to join them because they “need a soccer player”.

They guaranteed him a lifetime of wealth.

His situation in his career was so desperate he thought about it.

He followed directions to a church “in-between nothing and nowhere. … There were a number of people there‚ all of them white people and dressed in black”.

Later Modise was told to go to a bank and withdraw all the money from an account he thought was empty.

He got to an ATM and found that R100 000 had been deposited in the account‚ but was nervous and only withdrew R1 000.

Soon after the footballer had blown off Melissa and the “organisation”‚ the book says in its next chapter‚ he was contacted by a “king from Congo”.

He went to the king’s expensive house in Houghton on various occasions‚ on one where a ritual was performed where “Teko did as he was told and closed his eyes.

"The chanting from the king intensified.

"As the chanting got louder Teko realised that there was not only the one voice in the room … Teko realised the other voices were coming from the ornaments and sculptures.”

The king then gave Modise a “gift” of a “white rabbit”‚ pulled from a box that had been shown to be empty.

Modise paid the king R50 000‚ changed into dollars‚ which an attendant poured gasoline over and burnt.

Modise‚ 34‚ is winding down his career at Cape Town City.

The Curse of Teko Modise‚ written by Nikolaos Kirkins‚ has been published by Jacana Media.