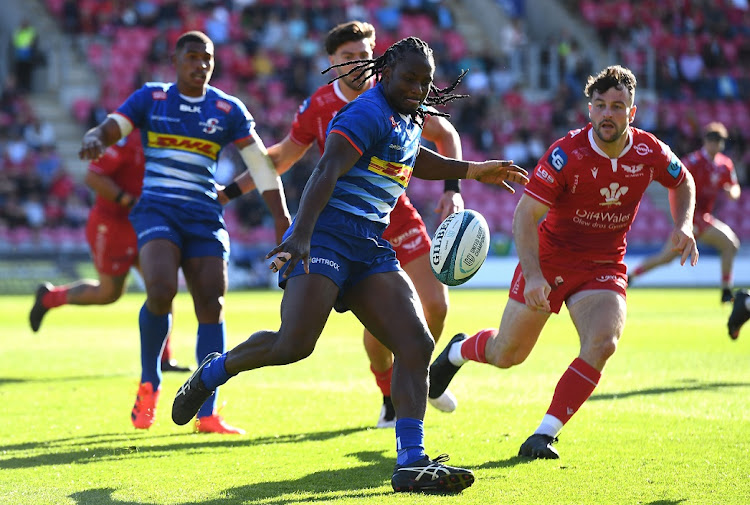 Seabelo Senatla of Stormers gets the ball away during their URC match against Scarlets on Saturday.
Image: Ben Evans/Huw Evans/Shutterstock/BackpagePix

The Stormers had to dig deep in Welsh mining country before they came up trumps in the SA conference in the United Rugby Championship (URC) on Saturday.

They won a tension-filled encounter against the Scarlets with the last move of the match when Ruhan Nel crashed over to secure a hard-fought 26-21 bonus-point victory.

For most of their clash against the Scarlets they did not look the trendsetting team from SA but in the end they deserve kudos for salvaging the points they needed from the contest.

Apart from securing a home quarterfinal, the Stormers by taking conference honours can look forward to a more favourable draw in next season's Champions Cup.

The win means the Bulls finish second in the SA conference with the Sharks also qualifying for the play-offs.

The Stormers however were caught cold at the start of the clash.

The fired-up Scarlets who had to win to clinch the Welsh conference and book their place in the lucrative Champions Cup next season, took the fight to the visitors.

Early penalties, a dysfunctional line-out and handling errors conspired against them in the opening half-hour.

Soon too they conceded a try through a chip over the first line of defence that was gathered splendidly by Jonathan Davies who offloaded to the unmarked Johnny Williams.

To be fair to the Scarlets it looked a well-rehearsed move that they executed to perfection.

That try stretched the home side's lead to 10 points and it served to slap the Stormers from their slumber.

They started to make significant gains upfront with man of the match Evan Roos eking out metres by going the direct route, while Hacjivah Dayimani profited from surges up the wider channels.

In fact, it was from one such burst that he delivered an offload that allowed left-wing Leolin Zas to beat the last Scarlets defender en route to the try line.

The ease with which he beat the last defender served to remind why he is the competition's top try scorer.

However, two significant chinks in the spine of their team continued to dog the Stormers.

They were without Herschel Jantjies at scrumhalf, and it showed.

They have struggled at hooker too where injuries have seriously limited their options.

As a result their line-out has suffered in the URC but somehow without one of the game's primary attacking platforms the resourceful Stormers have found ways of applying the squeeze on opponents.

They struck a balance between grinding up front and spring-heeled and highly dexterous backs and carved out opportunities as the half grew to a close.

They found reward after a sustained attack when Roos charged over from close quarters for a converted try that left the score 16-14 in the hosts' favour going into the break.

Crucially, halftime did not break their momentum and they immediately applied the pressure upon the restart.

Their forwards rumbled with intent before the ball was released to the back where Nel made the most of a slightly confused defence.

He slipped past a ball watching Davies and made a mad dash for the line.

That converted try handed the Stormers the lead for the first time in the match.

However, the yellow card that saw the influential flank Deon Fourie leave the field just before the three-quarter mark threw the match back into the balance.

Nel however broke Welsh hearts at the death.