Siya Kolisi: Talk is cheap if Boks want to convince dark days are not back 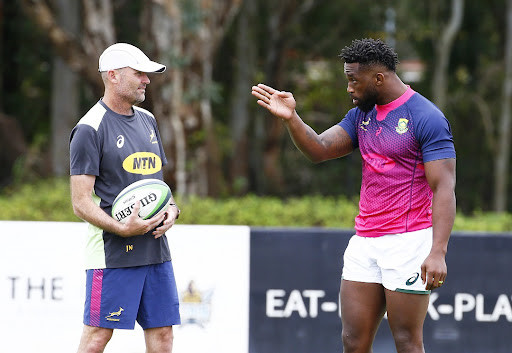 Springbok captain Siya Kolisi says no amount of talking will convince fans the team has not returned to the dark days of 2016.

That was the last time they lost four Tests in a row, but Kolisi stressed it is their deeds that will determine opinion as they seek to arrest their slide that now stretches across three defeats in the Rugby Championship.

The Springboks play the All Blacks in their return match in the Gold Coast on Saturday, a week after an agonising 19-17 defeat in their landmark 100th Test in Townsville.

This has been a testing week for the team who suffered twin defeats to Australia before last week's heartbreaking loss.

Kolisi, who was very much in the thick of things last week, insisted his team needs to do their talking through their actions on the field.

“It is only through the way we play we can offer (convince) as a team. It's about the effort, and we do put in the effort in the week, but it is tough,” explained Kolisi.

“At the end of the day it is about results. The result is not showing but the effort is there, the attitude is there. It is better to say 'I did so' rather than 'I said'. The result will speak for our effort.”

The Springboks have to summon whatever is left in their collective tank after five weeks in Australia, some of which were spent in quarantine.

The result will speak for our effort

The length of time away from home coupled with the defeats are taking a mental toll.

“Obviously the mood is down because we are losing all the time,” said the Bok captain.

“I don't have the right to complain and moan. It would be selfish of me. We want to finish the tour strong. Hopefully we can take the opportunities we get.”

To do that the Springboks will have to be more ruthless than they were last week when they delivered an improved performance. They applied the boot even when they had the All Blacks on the back foot and squandered opportunities to advance the scoreboard.

Expect more kicking on Saturday, though with a bit more judicious application.

“Our game plan gets us to where we want to be,” Kolisi pointed out.

“All we need to do is take those opportunities when we get there.

“We won't change our game plan but we are going to take our opportunities in front of us. In the World Cup we played the same way and we scored tries,” reminded Kolisi.

When you get one chance you must take it

Assistant coach Mzwandile Stick concurred the team is not going to change much tactically.

“You are not going to get five opportunities to score against them. That's why when you get one you must take it,” said Stick.

In that regard the team has missed the services of wing Cheslin Kolbe, who has been absent in the last three Tests through injury. Sbu Nkosi has deputised well but Kolbe's ability to fashion tries from limited time and space has reduced the Boks' attacking threat in the wider channels.

Apart from the defeats, the Springboks' lack of ambition in attack has been a source of deep frustration.

“We can't be upset if people are upset at our performance. They are passionate about rugby. I also support teams and sometimes I get emotional,” said Kolisi.