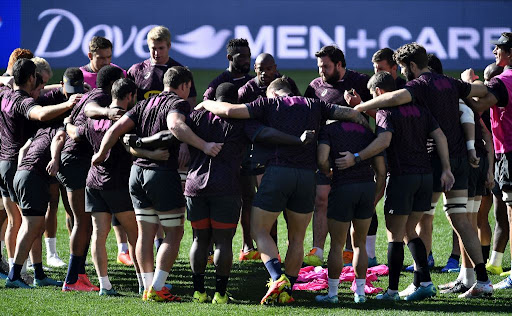 The Springbok team during captain's run at Cape Town Stadium. Team selection for the deciding Test against the British & Irish Lions is in the spotlight.
Image: Ashley Vlotman/Gallo Images

South Africa captain Siya Kolisi says his side have no special plans to counter the threat of New Zealand and that executing their own game-plan better is key for them in their Rugby Championship clash on Saturday.

The world champions are smarting after back-to-back losses to Australia that have allowed New Zealand to take the number one world ranking, and Kolisi acknowledged the Springboks’ last two performances dropped far below the standard they set for themselves.

Saturday's match this weekend in the neutral venue of Townsville in Australia will be the 100th between the Boks and All Blacks. For Kolisi, it is all about returning to what has made his team successful in the last few years – an accurate kicking game and forward domination through their pack.

"We have been disappointed losing two games in a row, but our main focus has been on looking at what we have done and to improve on it," Kolisi told reporters on Friday.

"Against Australia we deviated from our usual plan and paid for it, now we want to go back to what has made us successful."

All Blacks captain Ardie Savea says it is scary to think what the under-fire Springboks will bring to the contest when the southern hemisphere ...
Sport
3 months ago

"We messed up things we normally get right, so we want to get on top of what we need to do," he said. "It’s tough to lose two in a row, we want to win every game. But the biggest thing we have focused on is to get our stuff right this weekend."

Kolisi has called on his teammates to remember how they beat the All Blacks in Wellington in 2018, handing New Zealand a rare home defeat with many of the current Boks involved in that game.

"I have told the guys we are not being asked to do something we have not done before. A lot of this side have won against the All Blacks," he said.

"As a team we have our own plans, systems and goals, and as players we know what people at home (in South Africa) are expecting and want to see happen tomorrow."

Australia were able to stop South Africa’s vaunted rolling maul in the 30-17 win in Brisbane last weekend and were also vastly superior at the breakdown.

"New Zealand and Australia stop the maul differently and we have sorted that out," Kolisi said. "At the breakdown, we will not do anything different, it is just about executing properly."