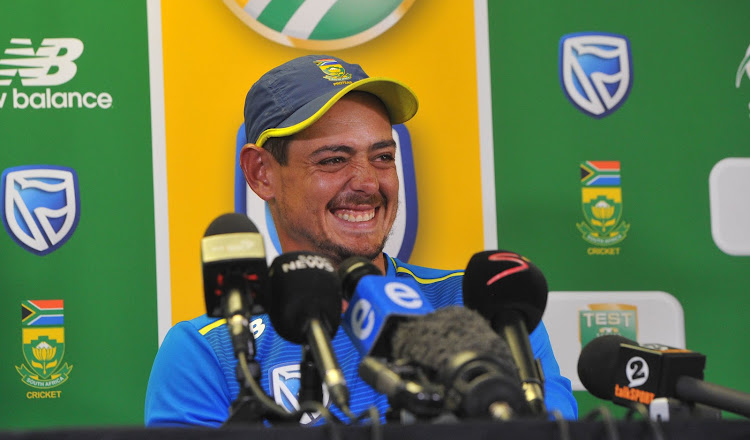 Proteas limited-overs captain Quinton de Kock says while the ODIs are still a work in progress‚ he draws confidence from the capabilities of his T20 group as the countdown continues to the Twenty20 Cricket World Cup in Australia later this year.

South Africa drew an ODI series against England in February and lost 2-1 in the T20s as De Kock endured a tough baptism in his maiden series as limited-overs captain.

The Proteas then lost another T20 showdown with Australia in De Kock’s third series as captain.

But De Kock’s team managed to redeem themselves against Australia with a 3-0 whitewash in the ODI series in early March.

The soft-spoken left-handed wicketkeeper-batsman said he is settling well in his leadership role and is learning new things.

“Obviously with the limited over captaincy‚ I must be honest‚ I think I took it pretty slowly you know. I’m still trying to get a feel of how to go about things‚” said the 27-year-old opener.

Despite the ODI whitewash over the Aussies in his first three series being the only shining light in between back-to-back T20 series defeats to England and Australia‚ De Kock believes it is in the shorter format of the game where his team can surprise many.

“Obviously we are busy rebuilding as a limited-overs team‚ especially in the ODIs but I think in the T20s we pretty much know what is going on.

“I think the highlight in general was obviously our series win against Australia.

“Obviously we had a young team and they had quite a powerhouse team and we played against one of the best one-day teams in the world and to beat them 3-0 was probably the biggest highlight‚” said the Titans opener.

The International Cricket Council‚ the sport's global governing body‚ said last week it was still planning for the tournament according to its October 18 to November 15 schedule‚ despite a worldwide shutdown of sport due to the Covid-19 crisis.

De Kock looked back at the Proteas' summer and echoed the sentiments of bowling coach Charl Langeveldt‚ who last week said there are positive to take from South Africa’s horrendous home performances despite a crushing Test series defeat against England.

“Obviously the Test matches were disappointing but I think the rest of the time we played really good cricket‚” said De Kock in reaction to the Proteas’ 3-1 defeat in the four-match Test series.

Cricket South Africa terminated all forms of cricket for 60 days on March 16 as the coronavirus halted sport worldwide.